Dialogue between employers and the government 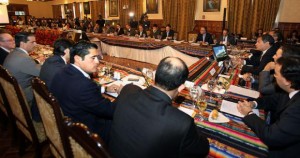 In an interview with El Comercio, Richard Martinez, executive president of the Chamber of Industry and Production, tells how is going the dialogue between the government and employers on Capital Gains and Inheritance bills and private investment.

Martinez says that entrepreneurs have always been open to dialogue, “we are defining an agenda, but the priority is the economic issue, to see how a sustainable growth is resumed and the second semester is not complicated more than the Central Bank has already announced. This year is complicated and we must talk about how to maintain sources of employment in the country.”

The businessman believes that it requires a powerful confidence to resume private activity: “Beyond the formality of the dialogue, the issue is about what we will discuss as a country. INEC figures say that from 100 suitable jobs, 76 come from the private sector. Then, that is the mechanism to return to the path of growth. You have to give more space to the private sector and hence signs of confidence are important.”

On private sector investment, which stopped following the issuance of the bills, he said that the mere announcement of the laws caused that effect. Some large companies decided to keep their investments paralyzed. “We expect these investments are resumed in the medium term, but with clear signs.”