In Brooklyn, a district of New York City, there is a cafeteria that flavors its surroundings with coffee that comes from all over Ecuador. 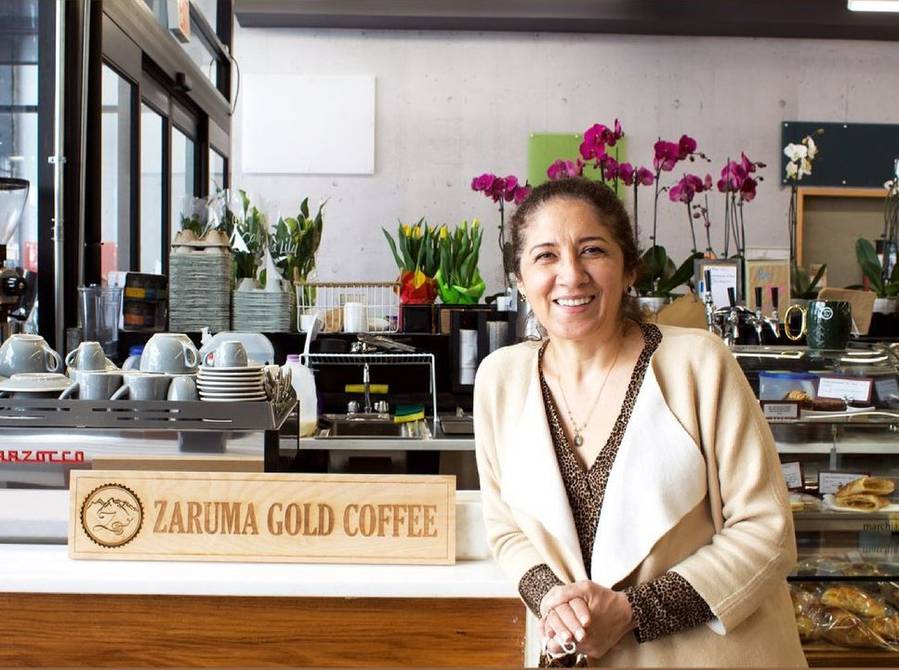 This is Zaruma Gold Coffee, which located in the Dumbo neighborhood, a few minutes from the iconic Brooklyn Bridge, offers its diners sandwiches, desserts, sweets, drinks and specialty coffee from the four regions of Ecuador.

Its founder, Diana Aguilar, says that being a native of Zaruma this coffee “is in her blood”, both because of her land and because her father dedicated himself to this industry for many years. Despite having graduated as a professor in the specialty of Chemistry and Biology, she never practiced this career because she always leaned towards business.

At the age of 18, in his hometown he set up a video store, a Betamax and VHS tape rental movie store, which over time became a bazaar by including various items. Then he was able to get a bigger store, where he set up a toy store.

However, certain events reversed their plans. “I lived through all the crises in Ecuador. The Cenepa war, the high interest rates, the political crises, the bank holiday (…), it was a very hard time for all of us who had businesses,” he recalls.

From there he decided to travel to the United States as a merchant. “There I managed to establish a small wholesale distribution and I had around 30 stores to which I sold children’s clothes,” says Aguilar. She took advantage of those moments and gave coffee, which she brought from Ecuador to her clients.

“They always said: ‘Here comes the Colombian lady with the coffee’, but no, it was Ecuadorian coffee. There was no tradition of knowing our country as a coffee grower”, he asserts, recalling a curious anecdote.

He points out that events such as the fall of the Twin Towers (2001) and the effects generated by the real estate crisis, in addition to the increase in the export of Chinese garments to the US market during that time, affected his clothing business. But this only meant a new opportunity for her.

“I saw that everyone liked (coffee) and I said Well, I have to dedicate myself to this (…), I had to look for a product that can be made in Ecuador, that I can do. It was the coffee,” he confesses.

Motivated to contribute to the growth of the coffee industry in her hometown, which had been weakened by the vulnerability of coffee prices and the change in activities in several families in the canton, she formed the Zarucoffee company in 2007 with her children in Ecuador. In their factory located in Zaruma they make two brands of coffee, one natural and the other specialty: El Zarumeñito and Zaruma Gold Mountain.

Making themselves known through fairs, little by little they established themselves first in the local market, managing to position El Zarumeñito on the shelves of supermarkets nationwide.

Diana Aguilar points out that with the Zaruma Gold Mountain brand, intended for export, she had certain drawbacks at the beginning. It indicates that at that time specialty coffee of origin was something new and novel, and that the product from Ecuador did not have much confidence in this area, in addition to the fact that the cost was a little higher compared to coffee from other countries. However, this did not stop her.

They consulted with specialized people in the field, attended large coffee events in Miami and Toronto, and produced new variations of the coffee, with which they were able to bring the brand afloat, even being acquired by other coffee shops in the United States for sale. They currently sell Zaruma Gold Mountain through their own e-commerce and through Amazon.

Zaruma Gold Coffee first opened in March 2021 and its grand opening was on May 7, during Mother’s Day week. “We were blessed and fortunate that they offered us to take a cafeteria that was established,” says Aguilar.

The plans to have a cafeteria date back to the beginning of 2020. However, the pandemic arrived, and everything had to be postponed due to the quarantine, the closed offices and the decline in tourism. 2021 arrived and things gradually returned to normal in Brooklyn, already with the vaccination campaign, and they were encouraged to continue with their project.

“It has been a surprise for us to see the acceptance of our community; how our followers have shared the publications and write to us from right here, from other states and from Ecuador”, he happily expresses.

In one of his posts on his Instagram account, the place is described as “an open space for art talks, art exhibitions and in general, to provide artists with a relaxed space, where they can exhibit their work and enjoy a Exotic Ecuadorian coffee of origin”. For example, on May 14 he had an exhibition of works by local artists from the Brooklyn scene.

They have a branch in Sommerville, Massachusetts, where the products are sold, and the Zaruma Gold Coffee brand is used. The owner of this place is Ecuadorian, and Diana Aguilar points out that she is her strategic partner.

Coffee from the four regions of Ecuador

The flagship product of the Zaruma Gold Coffee brand is the “Café de las Cuatro Regiones”, which are four presentations of specialty coffee grown in the regions of the Coast, Sierra, Amazon and Galapagos.

Each coffee has a card on its packaging that indicates in detail its flavor, area of ​​origin, the farm where it was grown, its altitude, what variety the coffee bean belongs to and what was the processing method. These presentations are sold as coffee beans or ground.

In addition to this, it also sells medium roast and medium dark roast coffee made from Ecuadorian Arabica beans. They also have on their shelf’s packages of dehydrated fruits (pineapple, uvillas, banana) covered with Ecuadorian chocolate, made from fine aroma cocoa. (I)