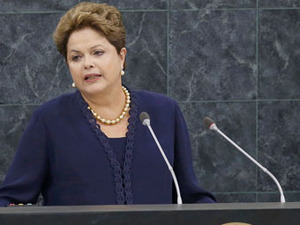 The president of Brazil, Dilma Rousseff, criticized yesterday the actions of international espionage carried out by the United States. Her comments were made during the opening of the UN General Assembly, in which U.S. President Barack Obama urged to take action to end the civil war in Syria.

Rousseff highlighted the case of a “breach of international law” and demanded a multilateral control on the use of Internet. “Such interference is a violation of international law and an affront,” said an angry Rousseff, who called off a visit to Washington, which was scheduled for October 23 to discuss the issue.

“Cyberspace can not be used or handled as a weapon of war through espionage,” said Rousseff, adding that the U.S. argument about the practice seeks to protect the world from terrorist attacks is “unsustainable.”

Rosusseff asked the UN “to regulate accordingly the conduct of the United States regarding the use of these technologies,” while announcing that her country will seek “to establish a multilateral framework for civil governance and Internet use and effective protection of the data traveling over the Internet.”

Obama stopped smoking because he was “scared” of his wife