Director for the Americas of HRW: The governments of Ecuador and Colombia must do everything possible to deliver the bodies of the kidnapped journalists 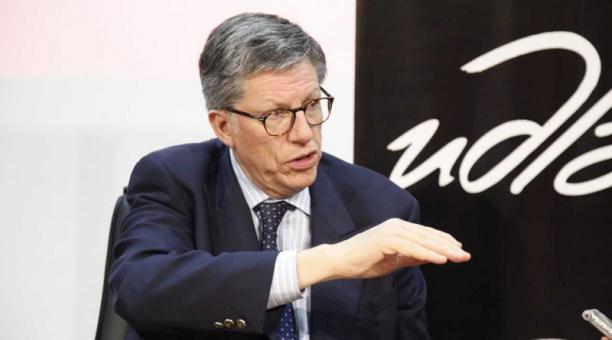 José Miguel Vivanco is the director for the Americas of Human Rights Watch, an international organization that looks after Human Rights throughout the world. On Tuesday, May 29, 2018, he met with the first president of Ecuador, Lenin Moreno; the head of the Assembly, Elizabeth Cabezas; and the president of the Council of Citizen Participation and Social Control (Cpccs) transitory, Julio César Trujillo.

In an interview with EL COMERCIO, Vivanco spoke about the Government’s commitments, the situation of journalism in Ecuador and the northern border.

After a year of Lenin Moreno’s Government, what are your differences with the previous Regime?

The meeting (with Moreno) was focused on recognizing the progress on public liberties, mainly freedom of expression and right of association. Today the atmosphere that is breathed, in what has to do with freedom of expression on the part of the media and journalists is very different from what existed during the mandate of Rafael Correa. A government that was characterized by promoting censorship, repressing and persecuting independent media and journalists.

On the other hand, the ruler Lenin Moreno is characterized by his tolerant attitude towards public debate and the promotion of pluralism. Regarding civil society, we have also seen that there is a much more respectful and constructive attitude towards important organizations of civil society. In the past, however, the rule was persecution and hostility on the part of a ruler like Correa who was deliberately intimidating important leaders and civil society organizations in Ecuador.

What were Lenin Moreno’s commitments during his meeting with the HRW delegation?

President Lenin Moreno has not been left alone in a speech or in a more open attitude than his predecessor. He has even promoted legislation, such as the Communication Law, which has been presented to the Assembly. This eliminates the most nefarious aspects of Correa’s law, such as the Supercom, the media lynching, among others. It has some very positive reforms that will undoubtedly impact on a greater space for the exercise of freedom of expression.

We still need to perfect this reform project because of what we have known it seems that there are possibilities of controlling the content of what the media produce. We speak with the President precisely about that. We value what had been done, we celebrate the reform proposed to the Assembly, but we also told him that there were still challenges, modifications that were necessary to introduce in the debate in Parliament. He invited us to participate in the process. We hope to be able to appear in the Committee at the Assembly and present our points of view, both verbally and in writing, regarding the bill to reform the Communication Law.

And what were the commitments on freedom of association?

As for civil society, Decree 16 that regulated the functions of civil society during the previous Regime, contained a series of inadmissible restrictions on the exercise of civil society. That was replaced in October of 2017 by President Lenin Moreno who also eliminates the worst concepts of Correa’s regulation, but there are still some problems that must be corrected. We presented them to the President and in general he showed great receptivity. He was very open to continue promoting reforms that bring Ecuador closer to international human rights standards.

On freedom of expression and the press, you said that these are fundamental for society. How to guarantee these rights in the face of acts of violence such as the kidnapping and murder of a newspaper team of EL COMERCIO?

However, the experience of Ecuador is unprecedented. The fact that an irregular armed group has kidnapped some journalists and then tried to negotiate their release in exchange for a series of demands that were not met, I do not remember cases in Colombia where those journalists ended up being killed by the group. It is usually possible to persuade them to release journalists or any hostages, capture the ringleaders or negotiate a solution. In this case, I regretfully believe that this group acted with a cruelty that we are not used to in Latin America.

In this, do not confuse yourself. The main responsibility for the deaths, for the mistreatment, for the cruelty rests on the shoulders of these irregular armed groups. It is evident that the Government, both in Colombia and Ecuador, must do everything possible to capture those responsible for these events and to hand over the bodies of these journalists to the relatives of the victims.

Speaking of Colombia. How do you see the peace process, after it had to be suspended in Ecuador and now takes place in Havana?

I think it was a justified and timely decision, because the ELN and any irregular armed group cannot pretend to participate in peace negotiations and continue to commit crimes and commit abuses as usual.

As if the negotiations were indefinite and the behavior of these groups did not influence the possibility of advancing with peace negotiations. I think that the Government of President Lenin Moreno did very well in suspending cooperation with this process. Because we have found that, for example, in El Chocó how the ELN continues to commit serious abuses that include kidnappings, murders, displacement, recruitment of minors.

That is to say, basic violations of international humanitarian law, and even so they believed that they could continue with impunity negotiating an eventual peace agreement in Quito. It is very important to reach a peace agreement with these irregular groups, but it cannot be left the impression that their conduct in the field does not count when deciding whether or not to extend these negotiations.

On May 27, 2018 the presidential vote in Colombia was held and will be defined in June. How will the election affect Ecuador?

I have no comments about it. We do not issue concepts in the middle of electoral campaigns. Also, that my opinion would be purely speculative. The important thing is that this process be carried out with transparency, without violence.

I think that up to now the example of the civic spirit of Colombians has been exemplary. Among some of the points that HRW has pointed out in Ecuador are the abuse of minors, the situation in prisons and the reproductive health of women.

How are these issues with the new Government?

What we have found is that the prison population continues to grow. But we do not have, and we should update our information regarding the prison conditions, the overcrowding and the policies that are being developed. There is an area that we must follow up on.

And another is what has to do with reproductive health, the possibility that women in Ecuador can have a decision, can make options when they face for example a pregnancy that is the product of a violation, when the life or health of the mother is in danger, or when the life of the fetus is not viable. All these matters, which were interrupted in the past when an attempt was made to modify the Criminal Code to decriminalize some of these hypotheses, the Correa government in absolutely recalcitrant terms prevented them from advancing. I hope that the new conditions allow us to take up these issues again. (I)