Disagreement between employers and workers for wage calculation 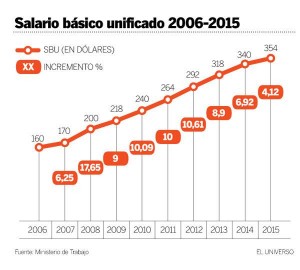 Meanwhile, the employers consider that the increase should be based on inflation (3.28% accumulated until last November), the workers believe that one major is required in relation to the cost of the basic basket (about $ 670).

For Messiah Tatamuez, leader of the Unitary Workers Front (FUT), the increase should be based on the unified family shopping basket.