Discomfort in AP by veto to Identity Law 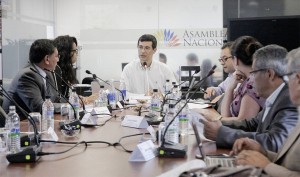 Child adoption by heterosexual couple, the change of sex by gender (with two witnesses) and the inclusion of disability in the ID card were the most criticized points by assembly members of the ruling party who make up the Commission on Autonomous Governments yesterday afternoon, when discussing the veto of the Executive branch to the Law of Identity Management and Civil information.

Alexandra Ocles and Liliana Guzman (AP) note that the veto to Section 94 ratifies veto discrimination by requesting witnesses to appear to change the information on gender.

“The intention was to eliminate discrimination, requesting two witnesses is much more discriminatory,” Ocles said. Their peer Fausto Teran joined the questioning.

With regard to disability, Ocles wondered why this is set in the ID card if there is already a disability license issued by the Conadis.

Mourning in Manabi by murder of migrants in Venezuela