Discrepancies in the Assembly due to Referendum Questions 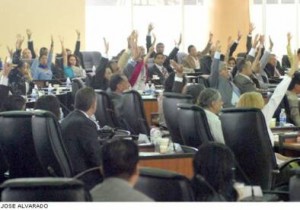 Yesterday, the former constituent Marcos Martinez summoned several former assembly members to discuss a draft, which contains arguments and facts of why there are certain rules laid down in the Constitution given that “it was a collective work, hundreds of thousands of people went to Montecristi and that can not be broken in a manner so liberal.”

Today the document will be submitted to the Constitutional Court, because the idea is to “create a Defense group for the Constitution” in order to prevent the approval of the questions.

The former constituents who support the “Defense group for the Constitution” are Iván Rodríguez, Fernando Burbano, Patricio Pazmiño, Gorki Aguirre, Mónica Chuji, Rosaelena De La Torre, and María Isabel Segovia from Alianza País; María Molina and Jorge Escala from MPD; León Roldós and his niece Martha, from RED, and Andrés Pavón from Prian. According to Martínez, also Alberto Acosta, former president of the constituent assembly “is also very pleased with this initiative and he will support it.”

While, in Alianza País more members are disassociating from the party, two months ago Washington Cruz, assemblyman from Alianza País, asked for his separation of the block for non-attendance to the plenary and caucus meetings, which leads to “a total lack of representation for those who elected him, who are his mandators and who trusted in the assembly seats of PAÍS movement.” Sources close to Cruz confirmed that he will present his resignation tomorrow.

Alianza Pais coordinator, Juan Carlos Casinelli, minimized the resignations of the three Assembly members who have separated from the party and assured that they are using the referendum called by President Rafael Correa as an excuse to separate from the movement but not from the assembly.