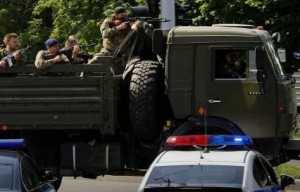 Dozens of pro-Russian militias armed with assault rifles have entered in early hours of Monday morning to the Sergei Prokofiev international airportin, in the self-declared capital of the People’s Republic of Donetsk and  have build forts inside.

The airport terminal has been evacuated and closed, and all flights have been canceled to ensure safety, said its Spokesman Dmitro Kosinov.

“There are armed men inside the enclosure, plenty of reason to suppress all airport activities” Kosinov said.

According to rebel sources, pro-Russian belong to the Vostok (East) Battalion and its actions aims to call for the immediate withdrawal of all Ukrainian troops from the region.

While in Donetsk and the surrounding area there’s not Army or National Guard presence, only some roadside checks in the hands of traffic police.