BREAKING NEWS
The airline Arajet will connect the Dominican Republic with Ecuador
Land iguanas reappear in Galapagos and this is the reason
UN: Ecuador is the third country in the world that seizes the most drugs
Ecuador detects new case of monkeypox and adds seven
‘Narco generals’: Comptroller finds evidence of three police officers
Florida court rejects appeal filed by Ecuador in Isaías case
18.5% of young Ecuadorians neither study nor work
Ecuador is a high-risk country for investment, says the United States
Ecuadorians abroad will be able to vote electronically in 2023
Three oarfish appeared in Ecuador during the last week

Drug camps and laboratories set off alarms in Ecuador

The intelligence services are on alert. Illegal groups from Colombia infiltrate the jungle area of Ecuador more frequently . The last alarm went off on Saturday, October 3, 2020, when the uniformed officers discovered a complete laboratory with the capacity to process 4 tons of cocaine each month. 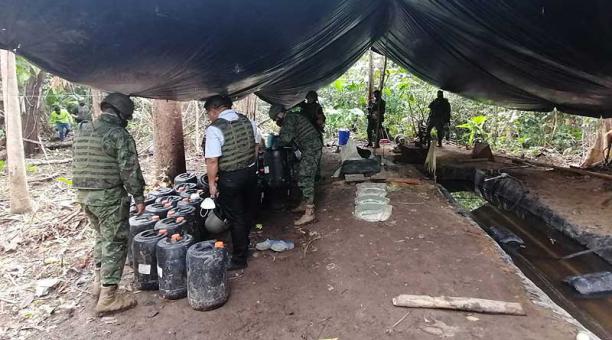 Drug camps and laboratories set off alarms in Ecuador

The clandestine camp was found in San Marcos, an area of ​​Chical, in Carchi .

In the place there were areas for dining, kitchen and for the rest of the suspects .

In other areas illegal material was processed, dried and pressed . At the site, 40 microwave ovens and chemicals were found.

The first discoveries of large illegal infrastructure began on August 23, but in the border towns of Sucumbíos . The military has in their possession reports showing how 10 discoveries of this type have been reported since then in the two provinces.

Officials who spoke with this newspaper explain that illegal operations and the displacement of illegal groups to Ecuador increased, because the coca leaf harvest in Colombian territory is now done four times a year and not three, as was the case before. That means they need to process more narcotics .

Despite this reduction , the international body clarifies that the production of cocaine “is stable”.

On September 16, the US Government revealed the list of countries identified as the largest drug producers . There appears Colombia. “In Ecuador there are no coca plantations. That’s why they bring the sheet and try to process it here ”, indicates a senior official.

The transport of the precursors and the leaf to Sucumbíos is carried out by means of boats , which move along the Putumayo and San Miguel rivers.

On August 29, the military found a boat with capacity for 20 people, which was near a cove where there were grenade launchers, bullets and other supplies.

In other incursions , the Army found six illegal coves or detachments of members of the guerrilla dissidents in Colombia.

Personnel who track this type of activity say that these complexes are used by the armed forces , to rest or hide weapons.

On August 30, the Armed Forces located pamphlets and weapons from a group that calls itself Border Commands . The results were known after an operation called Curaza, in which 140 soldiers participated.

Three days earlier, two other bases were discovered . This data was corroborated by the Minister of Defense, Oswaldo Jarrín , after the operation. At that time, the official pointed out that the war material found belonged to “dissident elements that belong to Colombia.”

One of the hypotheses used by the military guarding the border is that the armed groups seek to ” rest in Ecuador .” That is why the patrols have been reinforced.

The idea is to avoid the passage of illegal immigrants to Ecuadorian soil. The Armed Forces have even deployed aerial means to reach the camps, which are set up in areas that are difficult to access, as was the case in Carchi.

A laboratory discovered in Sucumbíos had a cooling system that was fed by water captured in ‘pools’ and jugs filled with coolant. Everything worked by hoses. This is how cocaine was processed.

Military Ecuador and Colombia are running the Mirror operation, since 2 April. The idea is to reinforce the security of the entire border line to prevent the groups that usually traffic in drugs, arms, ammunition, supplies and chemicals from operating.

Ecuadorian SMEs promote themselves in a virtual business conference