Drug gang weapons arrive from the United States and Peru

The United States is the main country where weapons and ammunition that enter Ecuador illegally and end up in the hands of criminal gangs are manufactured. 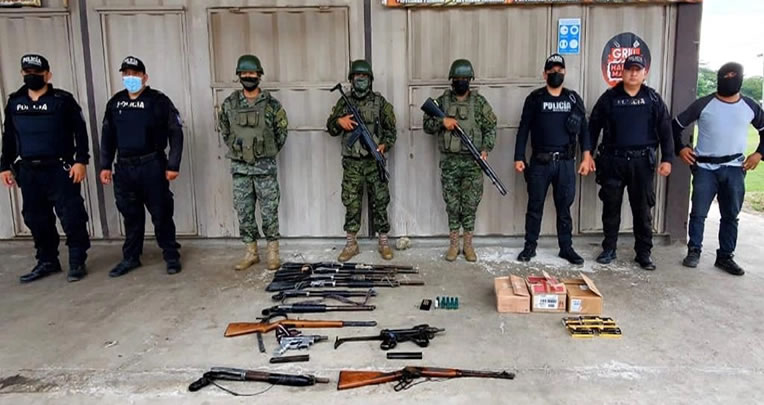 Behind the bars of the Litoral Penitentiary, two surprises awaited the hundreds of police and soldiers: the virulence with which the prisoners received them and the sophistication of the weapons they used to prevent their entry.

From strategic locations in the prison, the criminals opened fire with long-range rifles, pistols, and revolvers.

Two prisoners died in the attacks, while nine policemen and three soldiers were injured. Two of them serious.

Upon taking control of the Penitentiary, after several hours of crossfire, the uniformed officers encountered a second surprise.

In the gloomy pavilions 3 and 4 they found a powerful arsenal made up of rifles, shotguns, semi-automatic pistols, handmade swords and thousands of ammunitions of different calibers.

Their attention was drawn to the discovery of two very sophisticated weapons: a 7.62 mm long-range rifle, DB Diamond Back brand, and a submachine gun from Anderson Manufacturing, 5.56 mm caliber, with their respective ammunition.

Both weapons are produced in factories in the United States, where they are freely sold, even in large quantities, according to what PRIMICIAS was able to corroborate. The cost of these war equipment ranges between USD 500 and USD 1,000.

It is part of a pattern. In recent years, the United States has become the main country of origin where weapons that enter Ecuador illegally are manufactured, through different routes, especially from the border with Peru, as confirmed by Police Commander Fausto Salinas.

To establish how this chain, which begins in factories and arms warehouses in the United States, operates, the Police are conducting an investigation with specialized agencies in that country.

Although there is rigid control of US sellers and buyers, so far it is not known how criminal organizations divert weapons to the black market , to later transport them to Mexico, the Central American cordon and transfer them to other Latin American countries.

“The joint investigation with the United States is reserved ,” acknowledges General Salinas, who explains that this is a problem that involves global industrial arms trafficking networks, which take advantage of all legal loopholes for their criminal purposes.

Until October 2022, the Police and the Armed Forces seized 7,711 weapons, including 2,936 industrially manufactured, that is, from the plants of legal companies, mostly American.

The indicators are always increasing. In 2021, 7,661 weapons of all kinds were seized , including artisanal, firearms, and blanks.

When analyzing the captures per year, the trend of the origin of the weapons is confirmed.

Thousands of weapons in Ecuador

Most of the US-made weapons seized were rifles, submachine guns, and pistols.

According to Hugo Espín, a security expert lawyer, the Police and Armed Forces capture up to 30% of the weapons that enter the country illegally. In other words, some 125,000 weapons would actually be circulating.

“This allows us to understand the armed power that the criminal gangs that act as arms of the drug cartels have gained in recent years,” says Espín.

To this must be added tens of thousands of munitions, as well as explosives such as dynamite, hand grenades and even antipersonnel mines held by these organizations.

They buy these arsenals with the millionaire illegal income they obtain from activities such as drug trafficking, micro-trafficking, extortion, illegal mining, hit men, and human trafficking.

Only in the prisons of Ecuador, the mega gangs obtain income close to USD 100 million annually , according to Intelligence reports.

Bands like Los Lobos, Choneros, Tiguerones and Chone Killers have long – range weapons, comparable to those used by the armed forces.

“That is why its thousands of members are not afraid of confronting the Police, which, in general, have small arms, without real capacity to respond,” explains Espín.

Most urban duty police have Glock or 9mm short pistols. Many do not even have weapons, emphasizes Espín.

Only elite units like the GIR, GOE or GEMA have assault rifles and long weapons.

With the growth of gang arsenals, violent deaths also increased and the homicide rate tripled in five years.

43% of the deceased were young : they were between 18 and 30 years old. Added to this are the deaths of police officers.

At the beginning of November, five uniformed officers died in the province of Guayas, bringing the total number of police officers killed by criminal organizations to 63.

According to Police investigations, one of the criminal groups that has gained more prominence is Los Tiguerones, who use Anderson-brand US-made weapons .

This case is the subject of an investigation with international assistance , which seeks to identify who the operators of this network are, for which Ecuador has requested the collaboration of the United States government.

The Tiguerones operate for the Mexican Jalisco Nueva Generación cartel , which controls the main cocaine shipping routes to European countries from the port of Guayaquil.

Their weapons also arrive in parts aboard small planes from Mexico , which later return loaded with cocaine.

In this context, the Ecuadorian government is closely following the lawsuit that Mexico recently filed against eleven US arms companies.

The first complaint was filed by the administration of Manuel López Obrador on August 4, 2021, before a Massachusetts court and dismissed, but the Mexican government has once again filed an appeal.

Mexico accuses the eleven gun shops of “negligent” practices that facilitate the smuggling of weapons into that country, which has been plunged for 15 years in a wave of violence unleashed by drug trafficking.

The cost of combating violence in Mexico would amount to more than 1.5% of its annual GDP, according to official estimates, for which the Mexican government is seeking compensation.

Every year more than half a million weapons enter Mexico illegally from the United States , a country that has had 340,000 violent deaths in the last two decades.

The route of Peru

Most of the arms, ammunition and explosives enter Ecuador from Peru , through the Pan-American Highway and through 30 clandestine crossings in the provinces of El Oro, Loja and Morona Santiago.

The Ecuadorian Army makes seizures at the border and reports the findings and data on the organizations involved to the military authorities of Peru , seeking to strengthen interdiction at the border, but cooperation is scarce .

Before 2016, the weapons and ammunition went to Colombia, for armed groups, FARC dissidents and local cartels.

But with the accelerated increase in crime in Ecuador, that trend was reversed. Today more than 90% of the arsenal remains in Ecuador and ends up in the hands of criminal organizations.

Although this phenomenon is recurring, Ecuadorian intelligence agencies have not developed a traceability to accurately identify the operation of the networks, inside and outside the country.

There is no systematized report or insights that allow us to know how arms and explosives are trafficked from the countries of origin, in order to cut the supply lines, emphasizes Espín.

Where do they come from?

Military intelligence reports accessed by PRIMICIAS also reveal that a significant percentage of the weapons and explosive material used in illegal mining are made in Peru, specifically by the Armed Forces of that country.

This has been pointed out by Ecuadorian Intelligence of the Joint Command to its counterparts in Peru, in reports that are sent monthly, as part of binational security agreements.

Thus, for example, it has been possible to establish that three gangs control the trafficking of arms , bullets and explosives on the southern border:

The three have rifles, submachine guns and pistols , as well as vehicles for logistics operations.

“They obtain this type of material in Peru, since in that country there is free importation of arms, ammunition and explosives, which are acquired at a low cost on the black market, to later transport them through clandestine border crossings to the canton of Huaquillas. ”.

In Huaquillas they are stored and “later they are sold to criminal gangs in Ecuador and Armed Forces in Colombia,” according to a report from last February.

Transnational gangs made up of Colombians, Ecuadorians, Peruvians and Venezuelans operate on the border.

They use third-order roads that connect the towns of Tumbes (Peru) and Huaquillas (Ecuador), and go along the Zarumilla International Channel.

There they contact the owners of farms, with whom they have economic agreements or under coercion, to get support in their criminal actions.

Ammunition and weapons are transferred from Tumbes to Zarumilla and Aguas Verdes, encaletadas in taxi-rutas and motorcycle taxis, which enter border farms and then move to various cities in Ecuador, especially on the coast.

They also enter through the border, camouflaged among fruits, vegetables and legumes.

How do they get to jails?

Later, other networks enter the scene. They transfer shipments of weapons and ammunition to prisons , especially from Guayaquil, Cuenca, Santo Domingo and Cotopaxi .

The artifacts enter the prisons with the complicity of the military, police, guides and prison authorities.

Guillermo Rodríguez, director of the National Service for Persons Deprived of Liberty (SNAI), stresses that if the networks for supplying weapons to gangs in prisons are not broken, there is an imminent risk of new massacres .

To try to cut off that supply, the Penitentiary Intelligence Unit is already operating, which will be part of the Intelligence subsystems that report to CIES.

“You have to go to the causes, close all the holes that exist for arms trafficking, prevent them from crossing the border, from reaching the cities and prisons ,” says Rodríguez.

The State also finalized the purchase of scanners, fixed surveillance cameras and metal detectors, which will arrive on December 21 .

To identify the officials who cooperate with the gangs, there will be mandatory trust tests , both for the guides and for the police and military who are in the external filters of the prisons, Rodríguez announced.