Drugs seized in Anconcito have a cost of $ 20 million 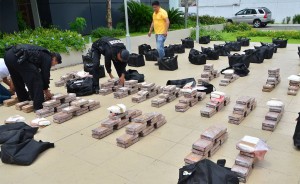 905 kilos of cocaine hydrochloride were seized by the police last Saturday night in the Anconcito parish (Salinas county, province of Santa Elena), was valued at $ 20 million.

This was reported by Colonel Marco Zapata, commander of the Antinarcotics Unit of the Zone 8. He said they seek to clarify if this case called Centinela del Mar, is related to the Sin Fronteras operation, executed in Manta and Esmeraldas last week.

In both cases, the alleged drug traffickers, according to Zapata, transported the drugs across the open sea in speedboats that were fueled by large vessels throughout the way to Central America.

Investigations determined that gangs were responsible for recruiting seamen that served as floating fuel stations.

From prison the owner of Terrabienes defends himself