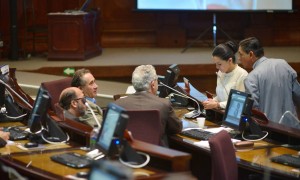 With an oil price of $ 35 it was approved yesterday the proforma budget for 2016 in the plenary of the Assembly. The government majority prevailed with 83 votes in favor, while there were 32 votes against.

During the discussion some Assembly members of the opposition warned that this amount, which has been considered prudent, might not be fulfilled. This is because so far this month, a barrel of Ecuadorian oil would already lower cost.

Assemblywoman Mae Montaño (CREO) said that thanks to information obtained from specialized international publications crude oil would now cost less than $ 32. She considered that next year a greater production quota would enter the market from Iran and the US would release export barriers, thus it is expected that this raw material drops its prices.

Indeed, according to data from the National Information Service, the average price of the Ecuadorian crude was registered in October 2015 at $ 38.29; and between November 1 and 18, the registered average has been $ 34.95. While the lowest price was recorded on November 18 when the Ecuadorian oil of barrel settled at $ 31.31.
Source: http://www.eluniverso.com/noticias/2015/11/25/nota/5260467/asamblea-se-alerto-que-crudo-estaria-debajo-35