Each polling station will have 200 police officers for Sunday elections 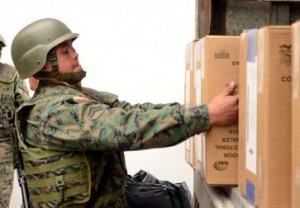 Each polling station will have 200 police officers for Sunday elections

In 13 parishes of eight provinces where the electoral process will be repeated, the National Electoral Council (CNE) – in coordination with Military Forces and the National Police – will redouble the security at those polling stations where violent acts were presented, suspending the elections of February 23.

The security operation was implemented from yesterday with the distribution of electoral kits from the military Geographic Institute (IGM). Custody of the material that came out yesterday from Quito was in charge of 90 members of the armed forces. Each group was made up of five vehicles, including a truck, custody and military intelligence personnel.
The Counsellor, Magdala Villacís,  indicated that each precinct will have 200 officers, from the Police Department and The Services to provide security. And, each of the UPC will have 100 extra officers for any eventuality.