Earthquake caused formation of new island in front of Pakistan 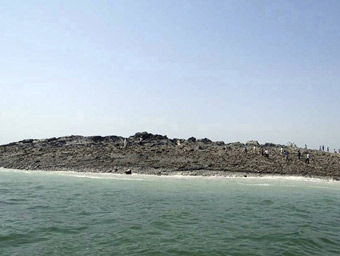 After the violent earthquake occurred last Tuesday in the Baluchistan province which resulted in the death of more than 300 people, an island erupted suddenly in the Arabian Sea and has caused the surprise of curious people and scientific  that observe it from the shore at Gwadar.

This islet which the inhabitants of that city have named  “Zalzala Koh” (mountain of the earthquake),  is made up of mud, sand and rocks measuring around 20 meters high, 40 meters long and 100 wide.

“It is very strange and a little scary to see suddenly something coming out of the water”, said Muhamad Rustam, one of the inhabitants still surprised.

In the past, other earthquakes have had unexpected effects, such as the one caused by the powerful earthquake of magnitude 9.0 that resulted in a tsunami in Japan of 2011, this quake was so powerful that it displaced the Earth’s axis about 17 centimeters, which meant a reduction of that day in 1.8 microseconds, according to Nasa estimates.

The island emerged from Gwadar is not a fixed structure, but a lot of mud and rocks that will disintegrate with the passing of time, explained the experts