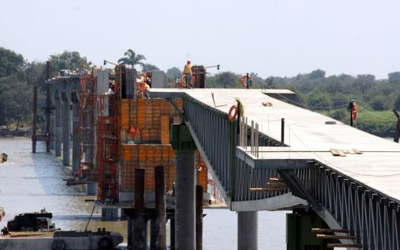 Over  the Guayas River,  currently,  around 800 metres of a pedestrian bridge extends,  that will connect the city of Guayaquil  from where  El Oro Street, ends, in the South of the city, to the Santay Island. The structure that will also will be for bicycles,  is almost finished.

At the moment, the  work is focused on a stretch of 75 meters, which will be refractory and is located 200 metres from the banks of the river down El Oro street, where  the boats that sail up the estuary will pass.

The work, which is being executed by the contractor Bueno y Castro, and is part of an ecological project that was raised by the Ecuadorian Government, and which also involves the ministries of environment and urban development and housing.

Part of this plan includes the construction of a pedestrian bridge of 700 metres in length which will unite the Duran canton with the Island, and will have a vertical lift  to allow navigability.

During an interview last November, the former governor of the Guayas, Viviana Bonilla, said through his Twitter account that the execution of the Guayaquil-Santay stretch had reached 60% and the delivery was scheduled for January of next year, as well as the Duran viaduct.