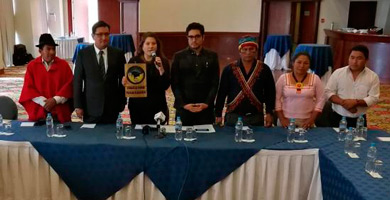 The Ecological Foundation Pachamama, closed almost four years ago by decree of the Executive of Rafael Correa, for allegedly violating the regulation, regained its legal status last Friday, reported today their representatives.

Defender of the rights of indigenous peoples and promoter of conservation in the Amazon is against extractive policies and mining expansion, the Foundation today denounced the “abusive measures” practiced by the previous Government.

In addition, the foundation announced that it will continue with its struggle after having recovered its legal status from the Ministry of the Environment.

On December 4, 2013, the offices of the Foundation were closed and its legal status was withdrawn following an Interior report in which it was mentioned that the NGO carried out “actions that did not appear in its statutory aims and objectives”.

As background, the demonstrations that were registered a month earlier in Quito against the opening of offers for 13 hydrocarbon blocks in the 11th Oil Round of the South East.Members of the Foundation were accused of having participated and encouraged the violence in the protests.

The lawyer of the organization, Mario Melo, said today in an appearance in the media that “the Pachamama foundation was closed for defending human rights, for defending the rights of indigenous peoples, the rights of nature, for having denounced the eleventh oil round that affected 3 million hectares of 7 indigenous nationalities “. And described the closing of the foundation as “an absolute political and arbitrary decision of the previous president of the Republic”

The executive director, Juan Auz, indicated that the NGO will continue working on the same path and with the same strategies used before its closure to give voice to the indigenous peoples and take their situation to the highest political and judicial spheres.

The President of the Republic, Lenin Moreno, repealed on October 23 Decree number 16 and number 739, whose purpose was to exercise control over civil society organizations and through which NGOs such as Pachamama and the National Union of Educators (2016).