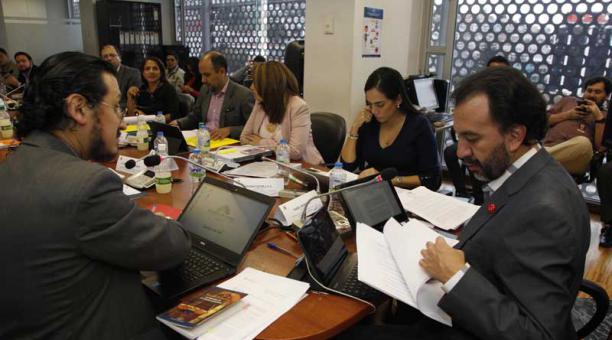 The Economic Regime Commission of the Assembly met the afternoon of this Tuesday, November 21, 2017, to continue with the analysis of the law to boost the economic reactivation, which was discussed yesterday in the first debate.

The document sent by the Executive on October 31 to the Assembly, already has a 50% of changes and will reach a second debate this Saturday November 25 with even more adjustments, because the Commission will have two more meetings to receive proposals for more stakeholders affected by the project.

Today, for example, the Commission received representatives of business associations, liquor importers and white line producers.”The law still does not meet the expectations of this Commission and surely when we have the final text it will not cover everyone’s expectations,” said Pabel Muñoz, president of the Commission.

Representatives of the Association of Industrial White Line of Ecuador came to the Commission with the request to include in the bill the elimination of the Special Consumption Tax of 100% that taxes gas stoves from the 2014.

The association will commit to increase its sales of gas stoves abroad in USD 41 million more. According to data from the Association, in 2016 gas stove exports reached USD 68 million.”The goal is also to achieve an additional USD 21 million in tax revenues from these exports and 4,400 new jobs,” said Marcelo Jaramillo, president of Indurama, which is part of the Association.

Javier Mora, representative of the union, added that one of the main effects that caused this increase of the Special Consumption Tax to the gas stoves is the reduction of 40% of the jobs. Jaramillo also commented that although the industry supported the Government’s plan to replace gas stoves with induction stoves, the latter’s sales have been reduced to such a level that companies such as the one he represents have not been able to continue producing these stoves.

“The fall in sales has not allowed us to continue producing. As Indurama we have taken the decision to close the plant in Peru and bring all production and export to the country. Last year we had losses and we have dispensed with 1,400 jobs, “he explained.

Meanwhile Víctor Murillo, director of the Amcham Business Center, indicated that the union is concerned that the amendment of Article 76 of the Tax Regime law will encourage complaints for breach of the agreements established with the World Trade Organization (WTO).

This amendment, which is established in the draft, indicates that importers who fail to notify the Internal Revenue Service and Customs changes in the tax base and the sale prices to the public of the products will be sanctioned with a fine of 10% of the total value of the imported merchandise.

“The rules of the WTO establish that the same treatment should be given to domestic and imported goods, but this article creates a disparity between the domestic producer and the importer. This is also part of the agreement with the European Union and they will observe it and they will complain, “He warned. (I)