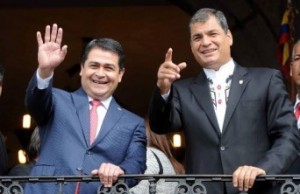 The Presidents Rafael Correa and Juan Orlando Hernández, met yesterday in order to continue the restoration of the diplomatic relations between Ecuador and Honduras, which had cooled down after the coup d´état of 2009 to the Honduran President, Manuel Zelaya, but resumed their discussions in May, 2013, once the Foreign Ministers signed in Tegucigalpa a mechanism of political consultations.

After a private meeting, the Presidents attended a working session with their ministerial delegations. There, Hernandez said that his Government is interested in details of the projects of social development, progress on issues of tax revenues, oil and mining issues of the Ecuador.

In the framework of the official visit, Correa said that Irina Cabezas, former Vice President of the Assembly, will be the new Ambassador of the country in Honduras. At the same time, the Ecuadorian Government granted the approval to the new Ambassador of Honduras in Ecuador, Mayra Falck.