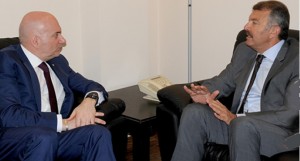 oday, Lebanon and Ecuador strenghtened its trade relations with an economic agreement, as reported by the National News Agency (NNA).

The pact was signed by the Lebanese Minister of Economy and Trade, Alain Hakim and the Ambassador of Ecuador in Berut, Kabalan Abi Saab. Among the attendees of the ceremony was the Consul Karam Dumit.

Hakim said that the importance of the initiative is because it is aimed at reviving the Lebanese economy through foreign markets, mainly Latin America.

Abi Saab also issued his opinion and stressed that the agreement provides “the legal framework to develop relations between the two countries and an economic approach,” he said.