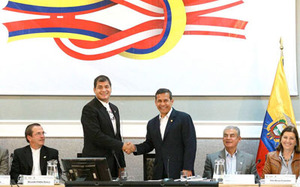 After the meeting of South American leaders of Ecuador and Peru, Rafael Correa and Ollanta Humala, respectively, in the seventh Binational Cabinet, in the northern city of Piura Peru, were two countries, which already have a bilateral connection, agreed to define in 60 day schedules and an energy plan in six months that would be regulate electricity trade.

“Peru and Ecuador agreed to instruct relevant agencies of the two countries so that (…) they take the actions necessary to start the bidding process for the basic engineering and construction of the transmission line,” said the Ministry of Energy and Mines of Peru.

During the opening of the meeting, Humala declared, “this is a lesson that we give to the world, to travel the road of peace, the path of development and, as he said Rafael (Correa), peace is the way.”

Meanwhile regime leader Rafael Correa said “there is no experience of countries that war each other and now every year they carry out binational cabinets, as if they were a single government.”

After the completion of the meeting, Correa and Humala signed several integration agreements. Among those was the construction of a building line of 500 kV electrical interconnection for both nations.