The Foreign Ministry of Ecuador and the Maritime Port Cooperation Project ( Seacop V ) of the European Union (EU) signed a memorandum of understanding on May 31, 2022 in the fight against illicit maritime traffic. 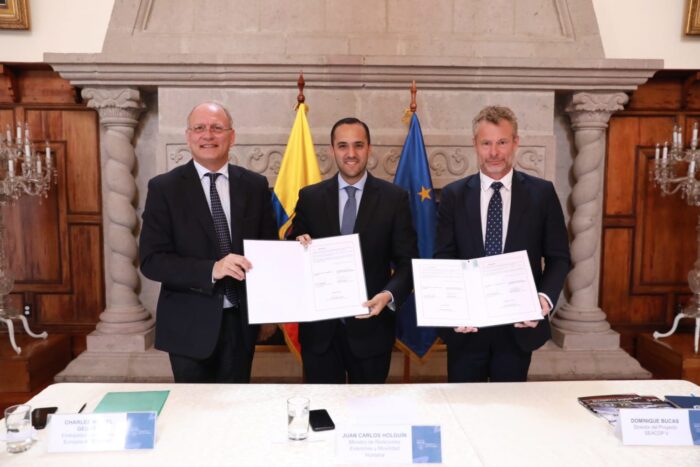 The Foreign Ministry of Ecuador and the European Union signed a memorandum of understanding on the fight against illicit maritime traffic.

Ecuadorian Foreign Minister Juan Carlos Holguín and the director of the Project, Dominique Bucas , signed the document. With that, Seacop V will support Ecuador in some actions.

Seacop V is a project focused on the fight against illicit maritime trafficking and associated criminal networks in countries in Latin America, the Caribbean and West Africa . It seeks to reduce the negative impact on security, public health and socioeconomic development.

With the memorandum, according to the Foreign Ministry, the knowledge of transatlantic maritime traffic threats will be improved , as well as the reinforcement of regional maritime information systems .

The implementation of inter-agency agents in specialized units will also be promoted . Cooperation at the national, regional and transregional levels, including the legal field, of controlled operations will be optimized .

The Seacop V project “marks a turning point in the fight against drug trafficking at the level of our seas. There is a very big fight between the drug cartels in our ports. Through this program we have to respond with clear objectives to the country’s needs,” Holguín said.

For his part, Bucas highlighted “the total commitment of the Ecuadorian authorities and the EU to fight against this plague that is drug trafficking” and that the subscription reflects that “common will.”

The Ambassador of the European Union in Ecuador, Charles-Michel Geurts , assured that the project could be extended to public-private cooperation . This with European companies that operate in Ecuadorian ports, for the fight against drug trafficking.

The project will enable direct work with the institutions in charge of implementing regional programs and initiatives .

The Ministry of Foreign Affairs and Human Mobility indicates that there are other projects within the cooperation with the EU.

The Eurofront regional program , which contributes to some efforts on the northern border of Ecuador. In addition, the CYBER-4-DEV program , aimed at creating cyber-resilience in development processes in the region. Ecuador is the Andean sub-headquarters for the development of these activities.

Ecuador rules out the Monkeypox epidemic

The first grain storage plant for industrialization was inaugurated in Guayas