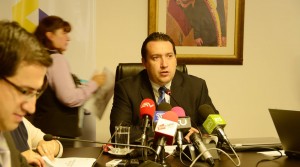 Ecuador is working with Venezuela and other countries in a proposal with the aim to increase the international price of oil. This would be presented on November 27 in Vienna, during the meeting of the Organization of Petroleum Exporting Countries (OPEC), said the Finance Minister, Fausto Herrera.

Herrera’s announcement comes amid one of the strongest drop in oil prices since 2011, international agencies reported.

The price of Ecuadorian crude has kept punishments of at least $ 10 compared with the one of West Texas (WTI).

Reuters agency reported from London that a drop was recorded from the”dollar bonds of emerging countries dependent on oil exports, mainly from Venezuela and Ecuador.”