The meeting between President Lenin Moreno and his American counterpart, Donald Trump , held last Wednesday (February 12, 2020), confirmed the turn of Ecuadorian foreign policy and the break with the so-called Bolivarian bloc . 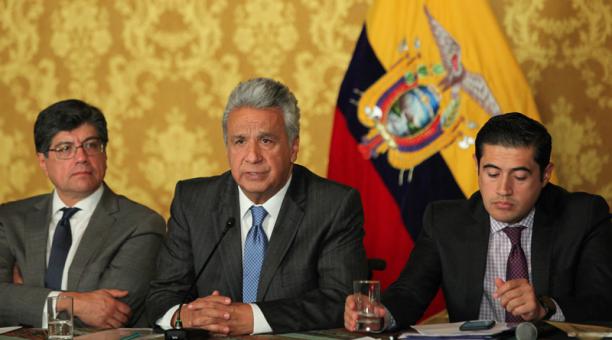 In the joint declaration of both presidents, disseminated by the White House, the fact that Ecuador achieved a “peaceful and democratic” transition to demarcate from the socialism of the 21st century was highlighted. In addition, Washington pledged support to Moreno in his intention to implement the “much needed economic reform to strengthen the economy, balance public accounts and restore growth” in the country.

“Ecuador had a very unusual outlook on life, but its great president (Moreno) realized the importance of getting along with the US,” Trump said in the White House Oval office.

In its third paragraph, the official statement states that both Trump and Moreno “agreed on the importance of increasing international pressure on the illegitimate regime of Nicolás Maduro to end the ongoing crisis, restore democracy and protect human rights.”

In addition, the document highlights that both leaders recognize and support Juan Guaidó as Interim President of Venezuela .

Last Friday, after finishing official activities in Washington, the Ecuadorian Head of State granted interviews to international media.
During his dialogue with NTN24, Moreno made comments in line with the joint statement issued by the White House . “Each town decides its destiny. However, when a regime becomes a murderer, dictator and starves a people, the international reaction must be stronger, ”he said.

In addition, he again said that from Caracas plans are being promoted to attack stability in the region. “They are trying to destabilize the democratic governments of Latin America. The 21st century socialism is a fiasco, ”said President Moreno.

In late January, Alexander Yánez , deputy minister for Multilateral Issues at Maduro, dismissed Moreno’s assertions and blamed “the US blockade” of his country’s economic crisis.

What kind of actions against Maduro will Ecuador support? According to the Ministry of Foreign Affairs, “all possible diplomatic pressure measures” are analyzed.

This position will be channeled through mechanisms, such as the International Contact Group (GIC), of which Ecuador is a part. According to the Ministry of Foreign Affairs , pressure could also be exercised through the Lima Group , where Ecuador is not a member, but does participate as an observer.

Despite supporting greater international pressure against the regime of Nicolás Maduro , President Moreno said the country will remain aligned with the Roldós Doctrine .

Michel Levi , professor and international analyst, recalled that this concept refers to the self-determination of each State in the solution of its conflicts, always guaranteeing respect for human rights.
Levi believes that the visit to Washington “ratifies” a strong alliance with the US position. About Venezuela

“Ecuador is not a member of the Lima Group but acts within it to request that the Government of Venezuela change and there is a transition.”
One of Washington’s latest strategies against Maduro was the exclusion of Venezuela from the program called América Crece .

During his official visit to Washington , the Minister of Finance, Richard Martinez , formalized Ecuador’s entry into this plan, which seeks to attract private American investment in energy infrastructure projects.
Last weekend, during an interview with CNN, Moreno acknowledged that it is complex for Maduro to leave power, but reiterated that both the United States and Ecuador “will be to support the Venezuelan people.”

On March 31, the process of regularization of Venezuelan citizens carried out by the Executive will conclude. According to the Ministry of Government , until 12 February, 209 365 foreigners completed their online registration, as part of the immigration census.

Yesterday, the Minister of Government, María Paula Romo , indicated that in two weeks technicians from the Automated Global Location System (Ats-Global) will arrive, as part of the agreements signed with the US. It is a mechanism for the exchange of migratory data, which is part of a regional strategy that does not include Venezuela.

The key dates in relations between Ecuador and the US

2/12/2020
President Donald Trump met with Moreno. The possibility of reaching a commercial agreement was opened and agreements on security, education and investments were signed.

1/3/2020
In March, an office of the United States Agency for International Development (USAID) is expected to be reopened in Quito. It will be located in the Embassy of that country.

1/4/2020
The meeting of the Trade and Investment Council is scheduled for April. At that meeting, it is expected to define the road map to start the negotiations of a trade agreement.

1/5/2020
In May, the extended bilateral dialogue will take place. According to the Valencia Foreign Minister, diplomatic authorities will participate to evaluate compliance with the agreements signed.