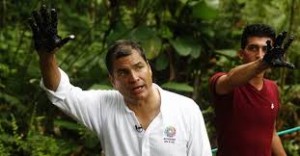 Rafael Correa invited this Saturday the Court of Arbitration at The Hague to observe the environmental damage in the Amazon left by Chevron, company that is trying to make this court to force the Ecuadorian state to assume a millionaire condemnation in favour of the oil company.

“We invite the whole world again, starting with the arbitrators in The Hague, to come to our forest to get their hands on toxic pools left by Chevron -Texaco ,” Correa said in his Report to the Nation .

Indigenous and peasants won a lawsuit against the U.S. company in the Ecuadorian courts, which in 2013 ordered Chevron to pay 9,500 million due to environmental pollution.

According to the oil company, which labels of fraudulent the judgment, Texaco fulfilled the correspondent repair, and the damage denounced by the government of Correa was generated by Petroecuador, with which is subsidiary that operates in consortium.

Chevron calls the judgment “illegitimate” and hopes that the international court of arbitration makes the state assume the millionaire sentence.

Correa noted that the General Attorney of the Nation obtained “strong documents that prove that the one who made fraud in Lago Agrio (Ecuador) is Chevron by making preliminary inspections with their own experts to try to deceive the court and make the legal expertise where there was no contamination”.