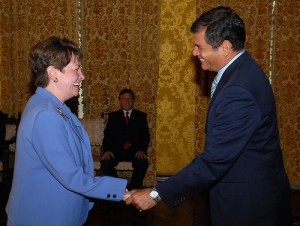 Today the Ecuadorian government demanded the United States explanations regarding the comments of  former USA Ambassador, Heather Hodges, regarding a diplomatic cable of WikiLeaks in which she said that president Rafael Correa must have been aware of the corruption of his former police commander Jaime Hurtado.

The news of Jaime Hurtado crimes and the news saying president Correa was aware of this were published through the Spanish newspaper El País by a WikiLeaks document. The information revealed how Hurtado used his power as a police commander to facilitate the traffic of people and the obstruction of justice regarding investigations of his corrupt subordinates.

Correa Acknowledge His Signature In Sue against El Universo