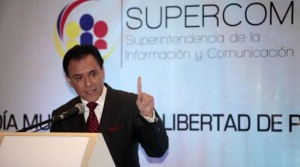 The Government of Ecuador considers worthless the observations made by the Inter American Press Association (IAPA) to the country in terms of freedom of expression.

The IAPA report, which indicated that several weekly addresses have been directed to “attack journalists,” was released last Monday and the next day, the Superintendency of Communication (SuperCom) refused it by considering it an “interference.”

“If they criticize us it means that we are on the right track.” This was the reaction of President Rafael Correa, on Wednesday night March 11, during an interview with journalists in the province of Manabi.

In addition, Correa said that the “SIP is the union that brings together media owner, who with the media power distort things” and that its conclusions have no effect in the country, because it is not an international organization, it does not respond to international conventions, and in the case of the Treaty of Chapultepec, this is created by the owners of the media themselves and is not supported by Ecuador, reportedyesterday the official media El Ciudadano.

The SuperCom replied it does not hunt down and the pronouncement of the SIP “does not represent the interests of millions of Ecuadorians, who voted ‘Yes’ for the creation of a law that regulates the media.”