Unforgettable night at the Khalifa International Stadium. The Ecuadorian team gave themselves completely and got a draw against one of the most difficult rivals in the World Cup. 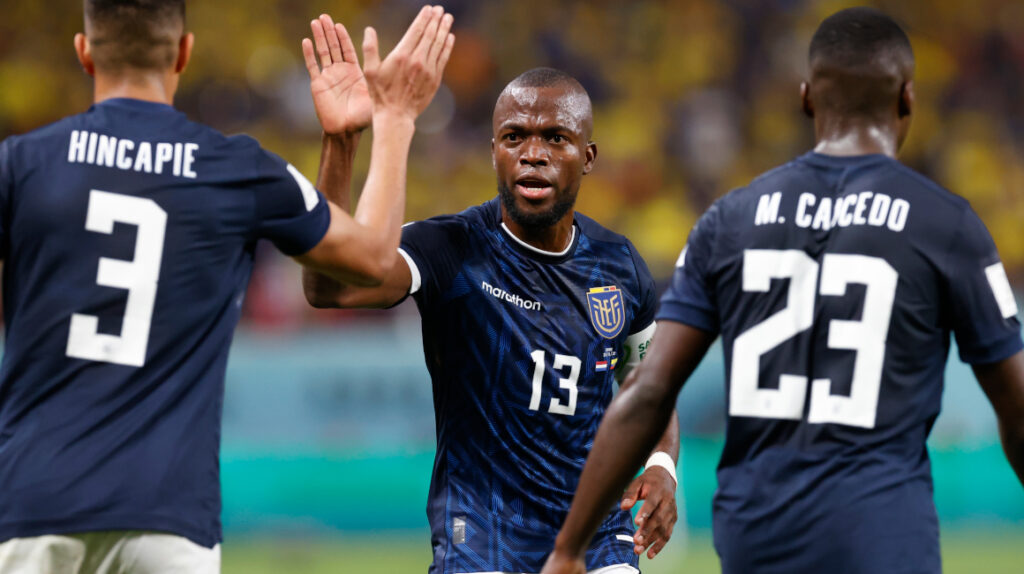 Enner Valencia celebrates with Piero Hincapié and Moisés Caicedo, in the Ecuador match against the Netherlands, on November 25, 2022.

Ecuador came to make history in Qatar and it is succeeding. Gustavo Alfaro’s team achieved a very tough draw against the Netherlands at the Khalifa International stadium and they need one point to ensure qualification for the round of 16 of the World Cup.

The first half was difficult. The Selection jumped onto the playing field with a somewhat strange tactical drawing. With three defenders, five midfielders and two forwards, but with Enner Valencia playing on one side.

And as soon as the game began, an oversight took its toll on the Tri. The one that never fails failed. Moisés Caicedo lost a ball near the area and Cody Gakpo did not miss out to score the first goal. They barely ran six minutes.

Gakpo is the new figure of the Netherlands . He has barely 11 games with his team, he has already converted Senegal and scored against Ecuador. He is just 23 years old and plays for PSV Eindhoven.

The Ecuadorian team took 20 minutes to settle on the field of the Khalifa stadium. As expected, the match was resolved at half court . Both coaches crowded the field of play to try to get the ball.

But after minute 20, Ecuador recovered the ball and spirit. And he started to drop the sides. La Tricolor built a game and created danger.

At 31 minutes, Enner Valencia had the clearest chance of the first half . He received the ball from the left and took a cross shot that goalkeeper Andries Noppert sent into a corner kick.

And at the end of the first half, the Ecuadorians at the Khalifa stadium celebrated the draw. Angelo Preciado took a shot from outside the area and Pervis Estupiñán deflected the ball into the back of the net. But the referee annulled it for Jackson Porozo’s passive offside. With the 0-1 against, Ecuador went to rest.

Surely Alfaro’s talk at halftime stirred foundations. The national team entered the second stage with a defiant attitude and soon found the tie.

The ‘Superman’ pushed the ball and the Khalifa International collapsed. The Ecuadorian fans, who were in the majority and never tired of cheering, exploded with joy.

Valencia became the fourth player in history to score six consecutive goals for a team in the World Cup. He is one of the master pieces in Gustavo Alfaro’s formation.

And for now, the Tricolor striker is the top scorer in Qatar 2022 , with three goals. And just as it happened in the first game, he was beaten again. This time, he even stretchered off the field of play.

Ecuador is not afraid of any rival and it made them feel that way. Gustavo Alfaro’s team came out to stand up against one of the toughest rivals in the World Cup and at times made him look very bad.

The 44,833 fans who arrived at the Khalifa Stadium enjoyed one of the most exciting and best played matches of the World Cup so far. And with Ecuador as the protagonist.

The Netherlands was a tough opponent, with a very tight defensive line. The Dutch team moved as a block and it was difficult for Ecuador to find spaces to reach the opponent’s area.

The one who gave the instructions in ‘Clockwork Orange’ is the remembered Edgar Davis, who left the technical zone on constant occasions. Louis Van Gaal, 71 years old and suffering from prostate cancer, preferred to stay on the bench.

It is the first time in history that Ecuador gets points against one of the top rivals, in a World Cup.

And the nearly 7,000 Ecuadorian fans made themselves heard. “Come on Ecuadorians, we have to win tonight!”, “If possible!” and “Ecuador let’s go Ecuador!” he rumbled, above all, in the second stage.

With this result, Ecuador shares first place in Group A with the Netherlands. With a draw against Senegal, they will ensure their qualification to the round of 16.

Millennial voters, the most numerous in the sectional elections