Ecuador excels in compliance with the ILO 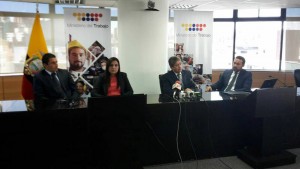 Carlos Marx Carrasco, Minister of Labour, said that Ecuador is not in the list of countries that breach the conventions of the International Labour Organisation (ILO) on labor matters.

“The country is not in the list because this government is a government of the workers,” the official said.

The Minister attended the 104th International Labour Conference in Geneva, Switzerland. The appointment took place between 1 and 13 June.

The Ecuadorian delegation reported to the ILO that the nation’s unemployment rate registered a decline and that the informal sector also declined by 20 points, ie “formal employment has risen by the same percentage,” claimed Carrasco.

Protests with black and tricolor flags in Quito