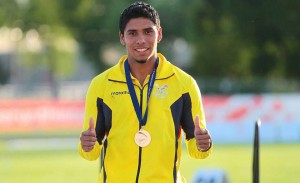 Two silver medals and one bronze medal were obtained by Ecuador in the the Junior Pan American Athletics Championship that took place last weekend in Edmonton, Canada, reported the Ecuadorian Olympic Committee (COE).

Maribel Caicedo, world champion in the minors category, won a silver medal in the 100m obstacles race and set a national record with 13.45 seconds.

The second silver medal was obtained by Karla Jaramillo in the 10 km walk. The young South American champion needed 47 minutes and 47.61 seconds to arrive first.

In the senior category, Jose Pacho, from Manabi, set a national record in the pole vault with a record of 5.35 meters. This mark allowed him to win the bronze medal.

Eduardo Espin was fourth in shot put and Katherine Tisalema, sixth in the 3,000 m steeplechase.