Ecuador has a trade imbalance with 18 markets 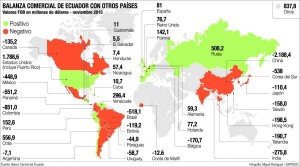 American markets are taking the lead when it comes to doing business with Ecuador. In the trade balance by countries, 15 of 33 are positive, these include the United States, Chile, Venezuela, Peru, Nicaragua, Guatemala, Cuba, Honduras, El Salvador, according to the report of the Central Bank of Ecuador (BCE for its Spanish acronym), of the Trade Balance by Countries until November 2015.
One of the aims of entrepreneurs is to increase sales to Central America, seek other markets without relinquishing all new trade agreements, in special with countries that are the main buyers of Ecuadorian products.

Daniel Legarda, executive vice president of the Ecuadorian Federation of Exporters (Fedexpor), told daily Expreso that high production costs have to be lowered with the help of the government. An approach with which tuna businessman Caesar Rohón and president of the National Cacao Exporters Association (Anecacao) Ivan Ontaneda also agree. “We have complicated tax issues, such as the payment of the advance income tax and new electricity bills, we do not know if they took off the subsidy or increased the price of the service,” Legarda said.

The three consulted experts also emphasized that Ecuador is the only country in the Pacific that has a trade agreement with the US despite being the main buyer of Ecuadorian products. (I)

Lower tax burden and trust would be the remedy