Ecuador hopes to negotiate with Japan “as soon as possible” 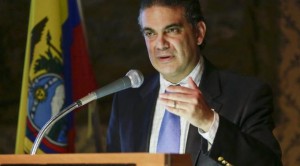 The Minister of Foreign Trade Francisco Rivadeneira said on November 6, he aims to start “as soon as possible” the negotiations on a free trade agreement with Japan, during his first official visit to the Asiatic country.

The main objective of his visit is “giving a sample of the will at the highest level to strengthen the business relationship,” said the Minister, who said that 2018 marks the 100 years of bilateral relations.

Trade exchanges between the two parties now represent about $ 600 million annually, a volume that “does not represent the real potential,” according to Rivadeneira, who noted that in recent years  “the business relationship with other countries in the region such as China or South Korea has increased more.”

Therefore, Ecuador seeks to “formalize the dialogues” maintained during the last two years with the Japanese authorities to “start as soon as possible” the negotiation of future agreements.