Ecuador is free of illicit crops but it is a transit country for narcotics, the UN says 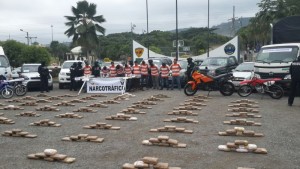 Ecuador, country of drug trafficking, according to the UN.

Ecuador is still considered a country “free of illicit crops,” according to a report by the UN Office on Drugs and Crime (UNODC) of 2014 disclosed Thursday in Quito.

“In Ecuador we are not talking of illicit crops. There is no evidence so far of it. But there is official information of the Ecuadorian state (…) that responds affirmatively that has been removal of plants in some areas,” said in a press conference Lorenzo Vallejos, coordinator of the UNODC in the country.

The UN office recalled that Ecuador “is the fourth most frequently mentioned country in cases of maritime drug seizure,” after Morocco, the Netherlands and Colombia, in the World Drug Report of the UN in 2013.

In 2014, Ecuador seized about 61.6 tons of drugs, including 50.1 tons of cocaine, according to the UNODC. Ecuadorian authorities have reported the seizure of 48.5 tons of narcotics in the first half of 2015.