Ecuador monitors activity of Chinese fishing fleet near the Galapagos

According to information from satellites, the fleet is found as a swarm of ships in a sector of the ocean equidistant between the Galapagos archipelago and the continental coasts of Ecuador. 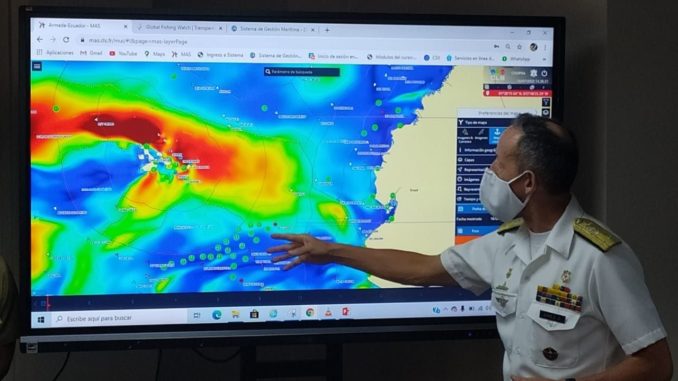 Ecuador monitors activity of Chinese fishing fleet near the Galapagos

Around the Galápagos the so-called Exclusive Insular Economic Zone (ZEEI) is established, in which Ecuador has jurisdiction and watches for being an ecologically sensitive region and serving as a corridor to an infinity of marine species.

That is why the Ecuadorian Navy Naval Operations Command conducts a frequent aeromaritime exploration of the EEZI, as well as in the Exclusive Continental Economic Zone, 200 miles from the continental coasts of the country.

The Navy indicated that, at the moment, a missile corvette is in surveillance work in the ZEEI, which joins other control devices activated by the Ecuadorian Government.

The situation is monitored by a Maritime Analysis Division of the Naval Operations Command, where information regarding the “suspicious movements” of said fleet is processed, the official note indicates.

This information is transferred to the surface or air units of the Navy to optimize surveillance and presence work in order to prevent the foreign fleet from carrying out illegal fishing activities in the EEZI.

Ecuador’s naval units could even stop ships that violate national sovereignty, as happened in 2017 with the Chinese Fu Yuan Yu Leng 999, when crossing the Galapagos protected area.

The nationality of the current fleet has not been identified in the Navy statement , although some local media indicate that it is Chinese.

In August 2017, Ecuador detected a large illegal fishing fleet near the Galapagos Marine Reserve made up of 297 vessels, one of them the Fu Yuan Yu Leng 999 .

That boat had entered Ecuadorian waters and was detained with 300 tons of prohibited fishing in its tanks, including hammerhead sharks in danger of extinction and which are part of the Red List of the International Union for Conservation of Nature (IUCN).

Last year, the presence in areas close to the Galapagos reserve of a fishing fleet with 290 vessels was also recorded.

The Navy explained that in the “Loja” missile corvette displaced to the ZEEI there are boarding personnel and a helicopter ready to intervene in case of detecting illegal activities in jurisdictional aquatic spaces.

The Navy remains “alert to enforce the sovereignty of Ecuador, thus reaffirming the permanent commitment of the Armed Forces in the protection of aquatic areas, their resources and maritime interests,” said the military entity.

The Galapagos archipelago is made up of thirteen large islands, six smaller ones and 42 islets, and for its rich biodiversity it is considered a natural laboratory that allowed the English scientist Charles Darwin to develop his theory on the evolution and natural selection of species. EFE

Minors are exposed to six types of sexual crimes