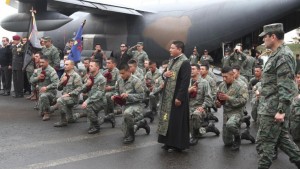 The trumpets intoned the touch of silence and the chapel, built in the Military School Eloy Alfaro, was flooded with tears of relatives and comrades of the soldiers who died Tuesday afternoon in the area of ​​Fatima in Pastaza .

Clinging to the caskets, fathers, mothers, daughters and wives could not believe what was happening. They could not accept that these soldiers have not returned home.

Yesterday, from Quito, 17 coffins with bodies of soldiers arrived. In the Tababela airport, around 11:00, the C 130 Air Force plane landed. The coffins were received by relatives of the military and the Ecuadorian President, Rafael Correa. (I)