In the space “De Frente con el Presidente”, the Head of State, Lenín Moreno, and the Minister of Agriculture, Xavier Lazo, spoke about the Government’s plans to reactivate agricultural production in the country. 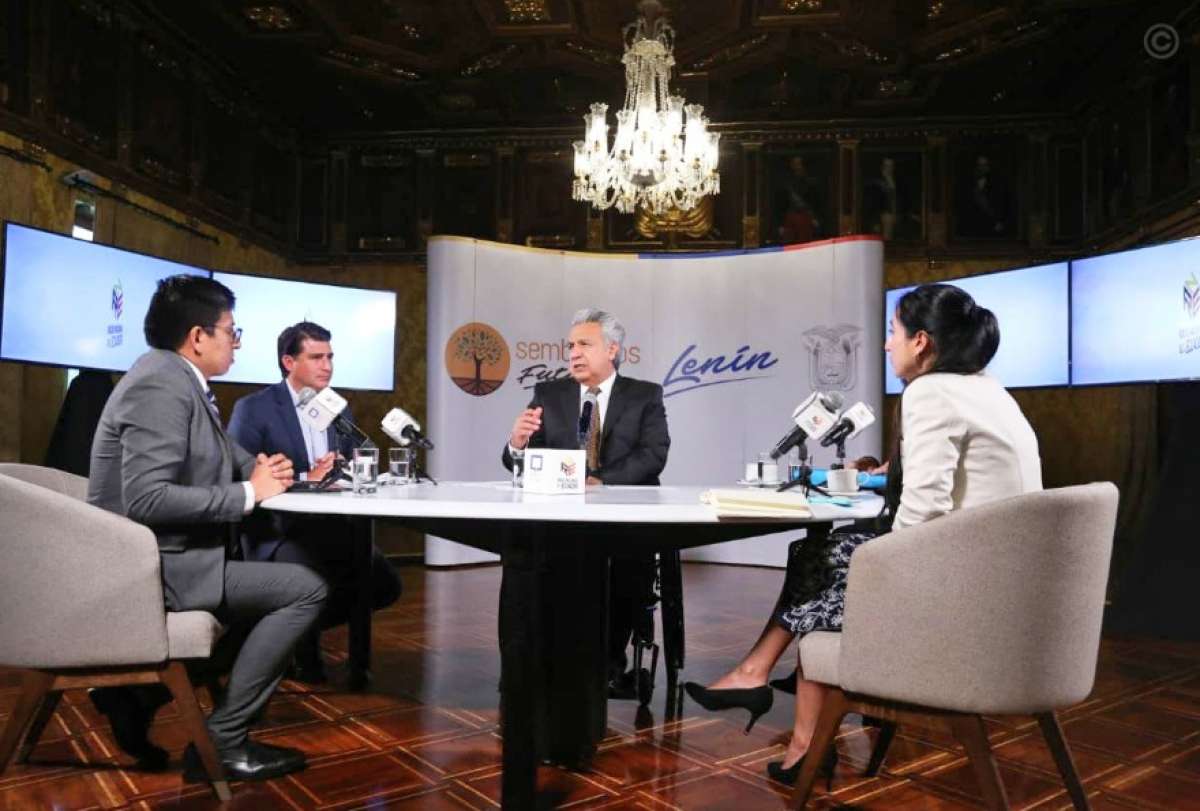 In this radio space, the President highlighted that among some of the most important actions undertaken by the Government for the sector is the National Agricultural Plan, an initiative that is already underway and through which the prioritized strategies for the promotion of production are focused with a vision of 10 years.

The intervention for the management of the plan is projected on the area of ​​agricultural, livestock and forestry use comprised by almost nine million hectares in the continental territory and 27,000 hectares in the insular region.

“Returning your eyes to the field means a comprehensive look at this space (…). We are focused there, “he said.

“It is estimated that this National Agricultural Plan will have USD 3,300 million to be invested in potentiating agricultural activities that can generate desired export products abroad,” Moreno said.

One of the actions framed in this plan is the National Agricultural Registry (Renagro), a large-scale administrative instrument that will offer solid and complete information on producers and the characteristics of their properties; and by obtaining a baseline, it will guide the construction of public policy.

“It allows three instances: to know what exactly is the situation of the farms in Ecuador and of the agricultural producers, identifying their problems and potentialities; knowing how to identify the possible beneficiaries of each of the government actions; and for the Decentralized Autonomous Governments (GAD) it will be useful for their land use planning plans, ”said the President.

In addition, among other aspects contemplated in the plan, is the delivery of agricultural equipment and machinery.

For example, the authorities announced that the provision of: laser graders, four-wheel drive tractors, power tillers, mini-excavators, among other supplies, is planned.

Moreno took advantage of the space to praise the work carried out by farmers during the most difficult months of the pandemic in the permanent supply of food to the entire population.

In that sense, Minister Lazo emphasized the excellent response capacity of the sector. “The logistics chains of the main products have been highly resilient to biosecurity measures.”

As for exports, “the agricultural sector performed extraordinarily well,” he said.

He explained that from January to October 2019, USD 4.9 billion was exported; while in the same period of 2020, exports reached USD 5.5 billion. “That is a growth of more than 12%. The most prominent products were bananas, cocoa, broccoli, among others ”, he pointed out.

On this subject, the Minister of Agriculture and Livestock indicated that only in banana exports grew by 15.22% and in cocoa by 26.88%.

The President recognized that one of the sectors hardest hit during the pandemic has been the floriculture. For this reason, the Government began a dialogue process with the United States that allowed Ecuadorian roses to enter this market with zero tariffs; management that promotes the international competitiveness of this industry.

Regarding the injection of resources, the President mentioned that through BanEcuador, USD 2,775 million has been placed during his government in more than 557,000 credit operations, of which 57% have been directed to the agricultural sector.

In addition, the Minister informed that a trust is being consolidated to lower the interest rate from 11% to 6% “for access to assets such as seedlings and irrigation that will increase productivity.”

Regarding the government’s particular attention to women in rural areas, the Head of State recalled that under his disposition, the Peasant Family Undersecretariat was created within the Ministry of Agriculture and Livestock, an area in charge of formulating policies to serve this population .

The Super Rural Woman program is the pillar of this attention to promote the economic and productive development of Ecuadorian women; To this is added inter-institutional initiatives such as the Violet Economy that articulates governmental axes for this purpose.

Regarding nascent industries and productive diversification, Minister Lazo clarified that Ecuador innovates with technical criteria and specialized advice. One of the examples of these new products is cannabis, which currently makes it possible to generate a series of products with agro-industrial and medicinal potential.
Precisely, in terms of research, the authorities commented on the recent liberalization of the simple hybrid of crystalline hard corn called “Renacer”, which has high yields and resistance to pests and diseases that affect this crop.

In that sense, the President also reported on the implementation of the Research Fund for Agrobiodiversity, Seeds and Sustainable Agriculture (Fiasa), which will allow the creation of knowledge and research centers, and a geoplasm bank to favor production of seeds.

In relation to issues of conjunctural interest, the Head of State reported that this month the reform project to the Organic Monetary and Financial Code will be sent to the Assembly.

In addition, when asked about the electoral process, he stressed, once again, his respect for the autonomy of the other functions of the State, especially in this regard. (I)