Ecuador obtains the second place in An Idea to Change History 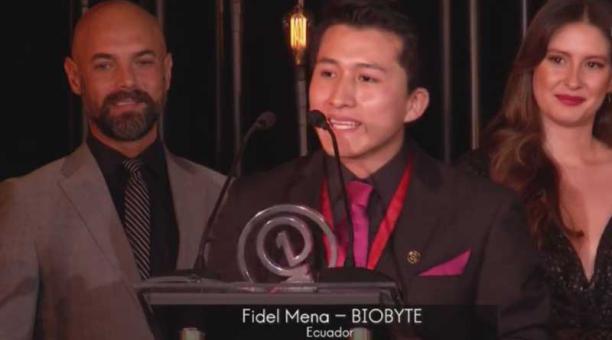 Ecuador came in second place in the contest An Idea to Change History organized by The History Channel. Fidel Mena, a student at the Equinoctial Technological University, was in charge of representing the country during the awards ceremony. BioByte is a device that uses low frequency waves to dose medicine to a patient through the skin without the use of needles.

The first place was for Max Hidalgo, from Peru, who presented the Yawa project, a small wind turbine that condenses water from the air to provide the vital liquid to areas where it is scarce.

The third place went to Eduardo Lozano, from Mexico, with the LIZA project, a device to detect sexually transmitted diseases that reduces up to eight times the cost of laboratory tests.

The winning project receives USD 60,000 to finance itself. The second place receives USD 40 000; the third place, USD 20 000; and the last two places receive USD 10,000. One of the main protagonists of the awards ceremony was Diego Aguinsaca, Ecuadorian winner of the 2016 edition of An Idea to Change History. Diego was part of the developer team of Hand Eyes, a small device prepared to help people with visual disabilities.

He was in charge of doing some of the live broadcasts prior to the ceremony that were broadcast by the social network Facebook, and he was also responsible for giving one of the inaugural speeches of the award ceremony.

Each of the presenters with whom he shared the stage had warm words and affection for this entrepreneur, in which they highlighted his excellent spirit, his joy and his enterprising nature.

The five entrepreneurs who reached the final round of the contest, after a selection process by History Channel and a round of voting open to the public. The last two places were for Camila Quevedo, from Chile, with the MiVOS project, a sign language translator; Carlos Cifuentes, from Colombia, with T-Flex, a low cost prosthesis that works, as an exoskeleton, to help with the rehabilitation of people with some type of limb injury. (I)