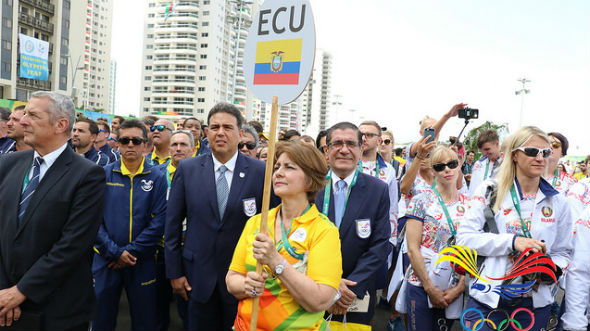 Nicolas Wettstein, equestrian sports, rower Gabriel Solá and weightlifters Alexandra Escobar and Fernando Salas are Ecuadorian athletes who yesterday participated in the opening ceremony of the Olympic Games, an act that featured Brazilian music and dances.

The Ecuadorian delegation was headed by President Augusto Moran and Chief of Mission Miguel Nacer Chavarria. It is expected that other Ecuadorian athletes arrive these days to complete the list of 38 national atheletes participating in these games.

The national flag was hoisted today in the building 24 of the Olympic Village, that since this week began hosting delegations from the countries which will participate in the XXXI edition of the Olympic Games Rio 2016.