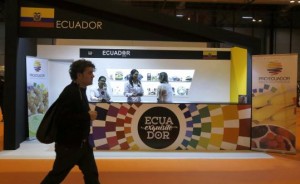 Ecuador’s Ambassador in Spain, Miguel Calahorrano, the head of the Proecuador Office in Spain, José Luis Cabascango, and chef Michael Monar, were responsible for opening the stand at the food fair.

Shrimp ceviche, fried bananas with tuna and palm salad, banana and chocolate desserts, canelazo, and dried fruits infusions can be savored at the stand, which will be open until Thursday.

“The goal is to show our products, present in the dishes that can be incorporated into the Spanish cuisine,” Monar said in a statement released by the Ecuadorian Assembly.

The Citizen Observatory is formed

12 schools will not start classes due to rainfall