Last Tuesday, President Rafael Correa, in a dialogue with journalists from Guayaquil, reported that the Government of Ecuador will submit a response to the action taken by the Andean Community (CAN for its Spanish acronym), and defended Resolution 116 by considering that the national economy does not allow the devaluation of its currency, the dollar.

“We will evaluate the request and will give the appropriate response,” although Ecuador “will continue to maintain and defend its sovereign right to enforce technical standards believed as necessary in order to protect the welfare of its citizens,” the president reiterated.

Correa also said that in the commercial field is to be understood that the Ecuadorian economy is fully dollarized since 2000, so it is impossible to devalue the currency, as did by other neighbor countries. 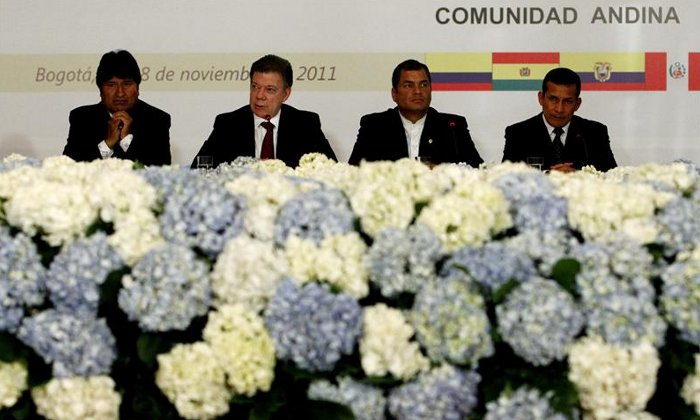 Presidents of the Andean Community of Nations (CAN), from left to right, of Bolivia, Evo Morales; of Colombia, Juan Manuel Santos; of Ecuador, Rafael Correa, and Peru, Ollanta Humala.

Report on YASunidos’ challenge is ready