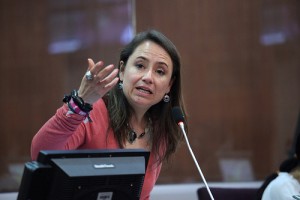 The 2015 Annual Summit of Women International Perspectives (WIP) awarded Ecuador for its policies to promote the presence of women in politics and reduce gender inequalities in the country.

The WIP prize was awarded to Ximena Ponce, Assemblywoman and Representative of Ecuador in the forum, who told EFE: “This is an award for the historic struggle of women, but also the political will expressed in recent years and which we call the citizen’s revolution. ”

Female representation in politics in Ecuador is 42% Assembly members. The country case is just one example of progress in Latin America to promote women in politics in recent years, said Carmen Moreno, Executive Secretary of the Inter-American Commission of Women (CIM).