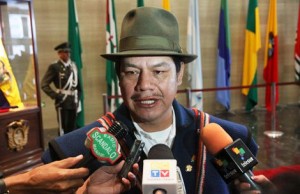 The Ecuadorian representative for the Andean Parliament, Pedro de la Cruz, presented a draft resolution to reject the statement of the Inter American Press Association (IAPA), in which they demanded the Assembly of Ecuador to repeal the Communications Act.

This requirement was made the last week in a meeting in Santa Marta (Colombia). De la Cruz said that “an international private organization cannot ask a sovereign state’s the repeal of a law that was discussed and approved in  a participatory manner with all sectors of Ecuadorian society and has democratized the media …”.

De la Cruz expected for the Parliament to pass his proposal on Friday, but decided for it to be analyzed by the First Commissions (Foreign Policy and Parliamentary Affairs) and Second (Culture, Science, Technology and Communication), which will debate in the next meeting of the Andean Parliament in Valparaiso (Chile), at the end of the moth.

Correa will meet with the President of Colombia in December