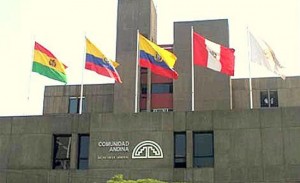 Ecuador expressed on October 12 its disagreement with the opinion of the Andean Community of Nations (CAN for its Spanish acronym), in which that organism called to extend the andean countries the “preferential and better treatment” given to the imports from the European Union and highlighted signed agreements with Colombia and Peru to facilitate intra-regional trade.

On Monday November 10, the CAN made known the resolution in which it also mentions that with an agreement of the Ministry of Industries which sets the treatment to the European imports, Ecuador’s government “has incurred in partial breach of the Cartagena Agreement (…) when establishing a differentiated and better treatment to the products of European origin with respect to products of Andean origin.”

Galo Lara is being extradited from Panama according to prosecutor Chiriboga