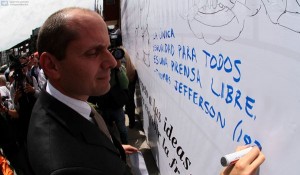 The Vice Chancellor of Ecuador, Leonardo Arízaga, rejected this November 17 statements made by the US ambassador in Quito, Adam Namm, who criticized the police treatment to protester students in the country.

Arízaga said that this statements “are not conducive to a positive agenda of bilateral dialogue, they rather block it.”

In an Official Gazette of the Chancellery, it was made sure that the Ecuadorian government “will continue to maintain and strengthen” the bilateral dialogue and announced that it will “continue to prepare the visit to Ecuador by the Secretary of State, John Kerry.”

This has not been the only friction between Ambassador Namm and the Ecuadorian government. In 2013, Namm was called by thechancellery to provide explanations for his statements in defense of freedom of expression in Ecuador, whose situation worries the US government.