Ecuador seeks to close deal with EU next June

Last Thursday during an event organized by the bi-national chambers of Industry and Trade of the countries of the European Union (EU) in Quito, Ecuador’s Minister of Foreign Trade, Francisco Rivadeneira said that negotiations for a trade agreement between Ecuador and the EU could end on next June and that they will only meet three negotiation rounds and not four as originally agreed.

“Our common vision of Europe, Brussels, of the European Union and the Ecuadorian government is that the negotiations could be closed in June, I cannot give a date, but if all goes well we would close the deal in the third round, there will not be a fourth round,”said the minister.

However it should be emphasized that the completion of the negotiations does not imply that the trade agreement comes into force automatically, as this instrument must be ratified by each of the parliaments; in the case of Colombia and Peru, the political process took three years.

The minister Rivadeneira added that European people “will find a political solution to help Ecuador as an example of having the will to strengthen relations. My expectation is that Europe will find a solution and will be aware of the effect this would have on the business sector, which is positioned and provides its services through exports to the 28 countries that comprise the European Union.” 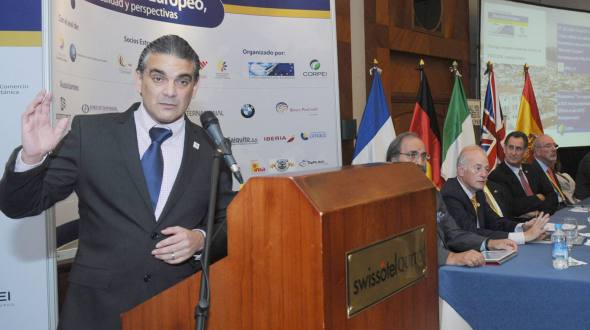 Minister of Foreign Trade Francisco Rivadeneira during the event.