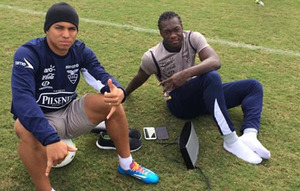 The national Ecuadorian team trained yesterday in Houston, Texas, for their game against Honduras, tomorrow at 21:00 in their second friendly match since the Tri qualified to World Cup Brazil 2014.

The Ecuadorian players had a break in the afternoon and evening and now know the game field where they will play tomorrow.

Ecuador comes into this game after drawing their first friendly preparatory against Argentina on Friday in New Jersey. Honduras lost 0-5 against Brazil in Miami last Saturday.

Ecuador ranks fifth in place of the Bolivarian medal