Ecuador will participate in the summit of the Alliance

A delegation of government authorities and business chambers traveled to Mexico. One of the objectives is to strengthen commercial ties. On Monday, July 23 and Tuesday, July 24 will be the fifth edition of the Business Meeting of the Pacific Alliance, an event in which the Minister of Foreign Trade and Investment of Ecuador, Pablo Campana, will participate with a view to enabling the country to become a member associated and not only as an observer.

The event to be held in Puerto Bayarta, Mexico, will be attended by the presidents of Chile, Colombia, Mexico and Peru. This meeting will involve 56 observer State Ministers and candidates for Associated States, as well as more than 50 government officials from the four countries of the block, more than 250 businessmen, among others.

Minister Campana said that the possibility of Ecuador being part of the block as an associate member gives it a commercial opening, but not a political one. “We want to increase that commercial development, attract investment. Beyond that in the future we can be full members, something that will take a long time, we must focus on more short and medium term goals, “said Secretary of State and stressed that the Pacific Alliance is the fourth most important block for Ecuador in the issue of exports.

According to the ambassador of Ecuador in Mexico, Leonardo Arízaga, the Andean country’s request to join the block will be based on the trade agreements it has with its member states. In this regard, he pointed out that Peru and Colombia already have these mechanisms of commercial exchange within the framework of the Andean Community (CAN acronym in Spanish).However still missing with Chile and Mexico.

According to the diplomat, signing a trade agreement between Ecuador and Mexico will be within the points of the economic agenda of the newly elected President Andrés López Obrador and recalled that important trade relations have developed between both countries. “In recent years we have had a flow of about $ 14,000 million of investment from Mexican companies in Ecuador. There are more than 300 Mexican firms in the country and we are interested in continuing to promote this investment, not only in the productive sector, but also in infrastructure, “said Arízaga.

He also highlighted that all the pertinent actions are being carried out by the diplomatic mission to support the Ecuadorian exporters. Precisely, the main representatives of the business sectors will accompany the government authorities to the summit of the Pacific Alliance.

The objective of this mission is to strengthen ties with the business leaders and authorities of the four countries, to generate a road map and thus accelerate Ecuador’s compliance to the block and the signing of a Trade Agreement with Mexico.

Currently, the Pacific Alliance represents the eighth largest economy in the world, with a population of 223 million people. Chile, Colombia, Mexico and Peru are the four most competitive economies in the region, according to the Doing Business Index of the World Bank.

Among the objectives of the Pacific Alliance is to promote growth, economic development and competitiveness of the economies of the countries that make it up. For Cinthia Quiliconi, professor at the Latin American Faculty of Social Sciences (FLACSO), the rebound of this block came after the change of progressive regimes in the region.

“The progressive Latin American governments did not deepen their commercial relations in integration organizations such as Unasur. That meant that many regimes change their strategy and begin to look at the Pacific Alliance as an interesting regional initiative to prop up trade, “the expert explained international politics. (I) 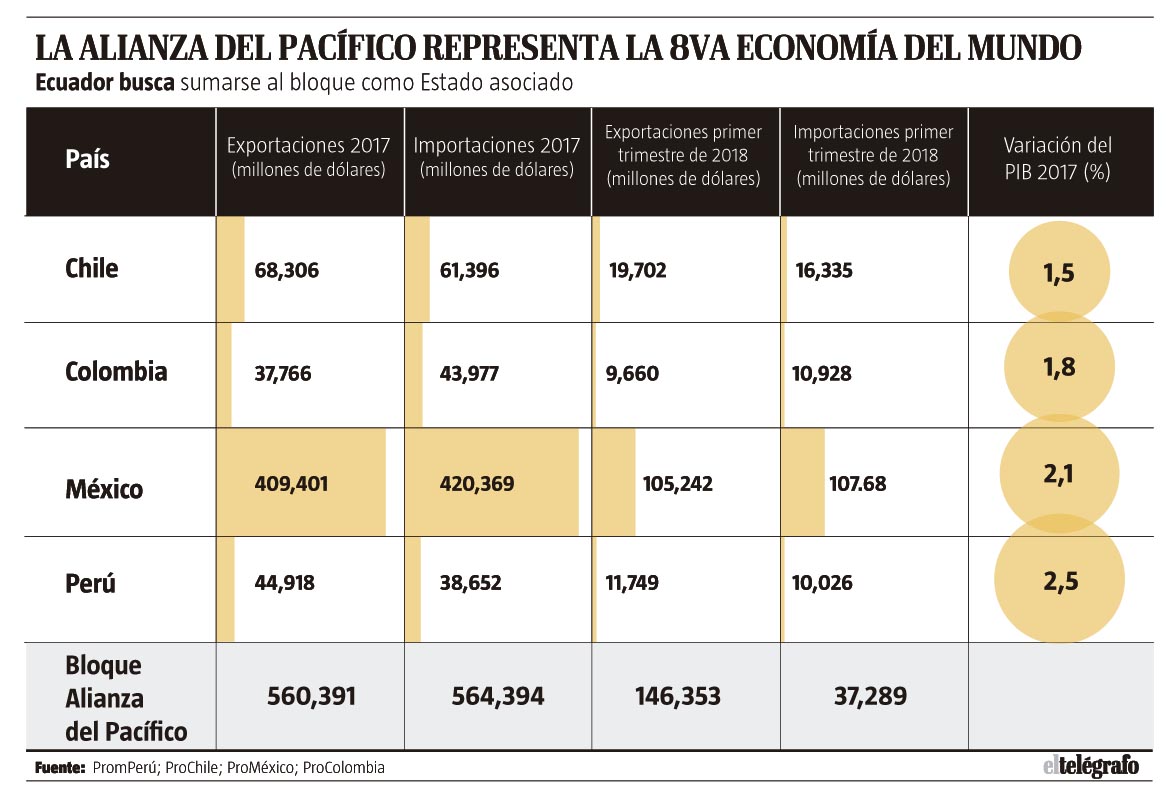 The Panela Fest brings together 13 bands in Latacunga