Ecuador would be willing to review the safeguard measure to Peru 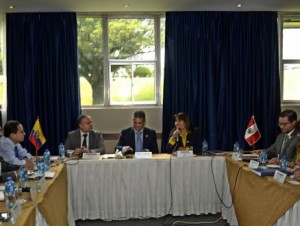 Ecuador’s government said yesterday it is willing to review the 7% safeguard measure, announced since January and applied to imports from Peru, a country that claims against this measure and calls for its removal.

The Ministers of Foreign Trade of Ecuador, Francisco Rivadeneira, and from Peru, Magali Silva, gave this information after a meeting held in Quito to discuss the issue.

Peruvian Minister called yesterday’s meeting as “very helpful,” and noted that Rivadeneira discussed, besides the safeguards issue, “a proposal for future work.”

The Minister explained that “alternatives” were discussed to resolve the conflict and added that next week, in Lima, the deputy ministers of Foreign Trade of the two countries will meet to make decisions on the issues discussed  yesterday in Quito.

The Minister said that Ecuador committed to “review” the safeguard measure and the possibility to immediately eliminate it, specially regarding raw materials needed for national production.

Furthermore, Ecuador would have asked Peru to recognize the Ecuadorian quality seal INEN as a “certificate of compliance of product scheme five,” for its commercialization in Peru.

Cigarettes price went up in with special consumption tax