Argentine residents in Ecuador gathered to watch their team proclaim itself as world champion. Approximately 1,000 people joined in celebration after watching Messi and Argentina win the World Cup. 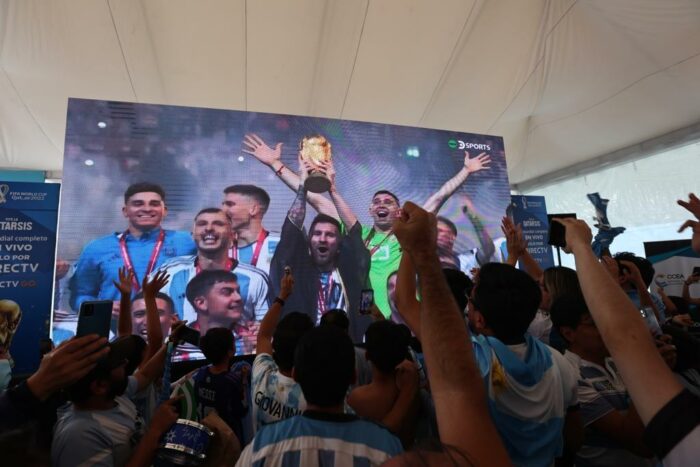 The Argentine residents in Ecuador met at the residence of the Embassy of Argentina, accompanied in an atmosphere of brotherhood by a large group of Ecuadorians. They added to them to encourage the Argentine team, which beat France 4-2 on penalties, after drawing 3-3.

The albiceleste shirts with Messi’s number 10 prevailed among the crowd. The attendees also waved the Argentine flags in an increasingly optimistic atmosphere as, once the game started, Argentina seemed more powerful against the defending world champions.

The festive atmosphere, which anticipated an Argentine triumph in the 90 minutes of play thanks to goals from Messi and Ángel Di María in the first half, faded away momentarily. The suffering was present after the devastating appearance of Kilian Mbappé, who tied the game with two goals in a row in the final stretch.

History repeated itself in extra time, when Messi once again put Argentina ahead and Mbappé again equalized the score to take the final to a penalty shootout. Finally the ‘ Albiceleste ‘ won the World Cup, to the shouts of collective happiness from the Argentine community in Ecuador.

Messi, the best in the World Cup

Lionel Messi, world champion with Argentina, with seven goals and three assists throughout the tournament, was chosen this Sunday as the best player in the final and the 2022 World Cup. He was seconded in the individual awards by his compatriots Enzo Fernández, the best young player, and Emiliano Martínez, best goalkeeper, as well as Kylian Mbappe as the best scorer, with eight goals.

It’s Messi’s World Cup. In his fifth and last adventure in the tournament, as the most definitive player, as the engine of Argentina’s reunion with the top of the world, 36 years after the triumph in Mexico in 1986 with Diego Armando Maradona.

Messi emotionally collected the trophy as the best footballer of Qatar 2022, in which he took over from Luka Modric , the winner in Russia 2018, in his farewell to the World Cups. In turn, he says goodbye as the player with the most games in history, with 26.