Until this Thursday, April 7, 2022, ten Ecuadorian companies are participating in Fruit Logística, a fair that takes place in Berlin (Germany) and is one of the most emblematic for learning about the global supply of fresh fruit and vegetables. 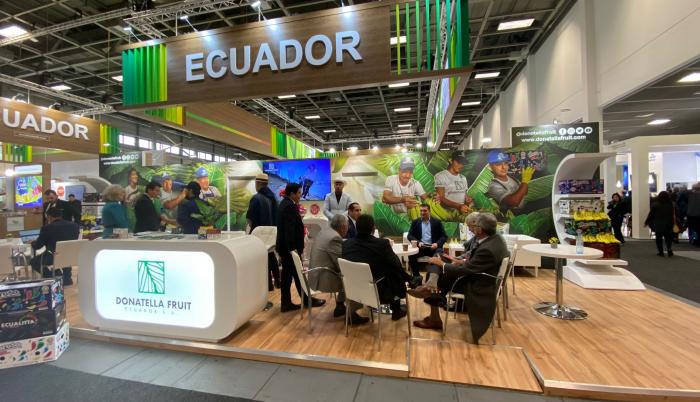 The Fair brought together more than 2,000 exhibitors from more than 80 countries.

In hall 23, of the fairgrounds, is the Ecuador pavilion, which was coordinated and led by Corpei, the agency that promotes the country’s participation in this event for more than 16 years, which, this year, managed to find space for several chain companies: six Donatella banana companies, Palmar-Ecuador Corporation; Export Fruit Chain, Export Jaime; Ginafruit, Marplantis; one that, in addition to bananas, offers other products such as bananas and pineapples, Terrasol; and three service companies, in logistics, insurance and fruit ripening: Alianza Logística TDGE SA, Seguros Confianza and Cold Energy.

Ecuador’s commitment to be at this fair comes at a difficult time for bananas. Not only has it had to face a reduction in its sales, due to the conflict between Russia and Ukraine (in 5 weeks it has stopped selling $27.52 million) , but it is also fighting for European countries to improve the payment for each box purchased, in a moment in which the rise in raw materials has been increasing the costs of production and processing of the fruit.

Richard Salazar, president of Acorbanec (Banana Marketing and Export Association), highlighted on social networks that these days of the fair have served for exporters to hold meetings with the main representatives of supermarkets , shipping companies and importers, to promote, between them “a shared responsibility”. The latter is the slogan used by the industry, alluding to the price support they expect to receive from Europe. In return, Ecuador not only offers quality, but also its commitment to continue adopting the sustainable practices required by the European Union.

Some 2,000 exhibitors from 80 countries participated in this year’s edition of Fruit Logística. The Corpei delegation is made up of the manager of Corpei Capital, economist Luis Montoya Vega, and the planner of the Ecuadorian presence in this pavilion, Mary Francis Andrade.

Andrade points out that, despite the fact that some exporters decided not to travel , due to the outbreak of COVID that affected Europe at the beginning of the year and due to the armed conflict between Russia and Ukraine, the Ecuadorian presence has been successful and that those who did dare to go have been able to display their products.

Sara Aguirre attends Fruit Logística for the first time to exhibit the products of her firm, Export Jaime. “We’re doing well,” she says optimistically. “This is my first year as an exhibitor and it has helped us to set up meetings with new clients.” Her company ships bananas to China, the Middle East and Argentina. As an effect of Covid and now of the war, Aguirre believes that the banana trade has been depressed, but it has not stopped selling. “We have lowered the volume a bit, but we have not stopped selling.”