The general government budget for next year will only receive $ 673.5 million from oil (or non-permanent) revenues. This was announced yesterday by Finance Minister Fausto Herrera at a press conference to explain the Budget Pro forma that was sent over the weekend to the National Assembly for its approval. 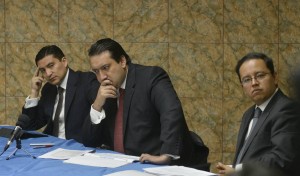 Herrera said that although the budget has decreased to $ 29.835 million compared to that approved in 2015 ($ 36.317 million), this is not about a draconian adjustment. He also noted that this budget will be the same used in 2017, since this will be a presidential election year, it will not be changed, only until the next government.

He explained that the Annual Investment Plan will increase from $ 8.116 million approved for this year, to $ 5,300 million, planned for 2016.

Herrera insisted on the macroeconomic assumptions of the budget: inflation of 3.3%; 1% growth in GDP; export price of a barrel of oil at $ 35. It is also expected to export 130.6 million barrels of crude and import 16.3 million barrels of fuel.

Ecuador will cover its deficit with more debt